It is true that, when asked what is Tether, many brothers will answer that Tether is USDT, is Stablecoin.

Unfortunately, the answer above is not really accurate.

That makes me think, whether too many brothers when they first entered the cryptocurrency market have approached the problem incorrectly, leading to the current situation.

That has led me to make the article today with the purpose of providing the most basic, necessary and detailed information about Tether in general and USDT in particular.

Hopefully after reading this article, you will have more knowledge about one of the three most powerful cryptocurrencies in this market.

Well, don't let you wait any longer. Let's get started!

Tether is the platform that allows Fiat currencies to be used on the Blockchain through the release of equivalent Tether Token.

The Tether platform was founded and developed by Hong Kong-based Tether Limited in 2014.

What is Tether Token?

A Tether Token (₮) has a value of 1 currency guaranteed it.

For you who needs to buy BTC, ETH, USDT fast, good price.

Can contact @Reality, in charge of OTC box of Coin98, ensuring prestige and quality.

In July 07, Brock Pierce along with two other members, Reeve Collins and Craig Sellars officially established Realcoin - a dollar-backed Stablecoin with a ratio of 2014: 1.

After a period of operation, CEO Reeve Collins decided to change the brand Realcoin to "Tether”On 20/11/2014.

During this period, Tether was testing a secret version of Tether Tokens secured by three Fiat currencies: USD, EUR and JYP.

In January 01, the USDT Token, guaranteed by Tether 2015: 1 with USD, was first traded on Bitfinex. At the moment, Bitfinex is the largest Bitcoin exchange.

During operation, Tether and Bitfinex have unclear connections through a series of consecutive events:

On May 05, 05, Bitfinex hired Friedman LLP to audit Tether.

On September 28, 09, Friedman LLP published an audit claiming that Tether's USD reserves are equal to the USDT currently circulating in the market ~ $ 2017 million.

At its peak, on November 07, 11 a document was distributed entitled "Paradise Papers”Has revealed more information about Tether and Bitfinex's relationship.

This document shows that the CEO of Tether and Bitfinex is really just one person - JL van der Velde. In addition, many of these two companies' positions are held by one person in a similar position.

Through all these facts, it is proved that Tether and Bitfinex always have a close relationship with each other.

During its operation, Tether first announced that it was hacked by hackers and stole an amount of USDT equivalent to 31 million dollars from their reserve fund on November 19, 11.

Just 2 days later (November 21, 11), Tether released an upgrade to OmniCore * and required all their customers to install the upgrade immediately to prevent the money. stolen.

*Omni Core is the software used by Tether customers to support Omni-class transactions.

After stopping the stolen money, Tether collaborated with the Omni Foundation to carry out a hard fork on Omini's layer in order to retrieve the lost money.

You can refer to the official announcement of Tether about this hack here: https://tether.to/tether-critical-announcement/

The operational nature of Tether

In the whitepaper, Tether describes the operation of the system quite simply as follows:

Users deposit fiat money to the bank account of Tether Limited. Tether creates and credits to the user's account an amount of Tether token equal to the amount that the user has deposited.

After that, users can freely perform peer to peer transactions, trade, exchange on the exchange ...

When no longer needed, users can convert Tether tokens into Fiat money through the Tether platform.

After that, Tether will destroy the Tether token and send Fiat money to users. 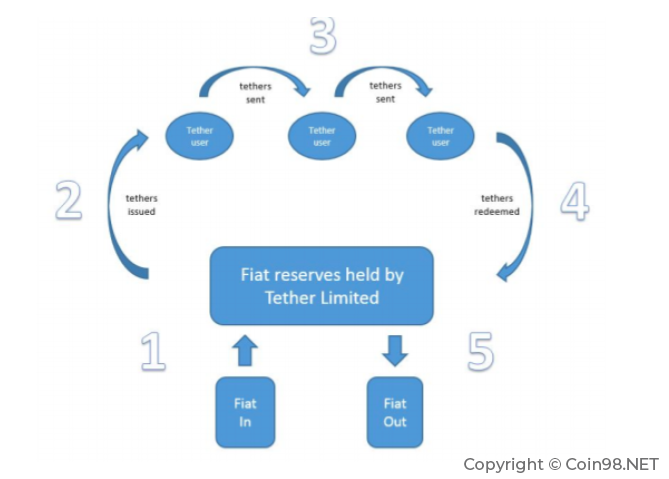 As mentioned at the beginning of the article, Tether issues 100% guaranteed tokens in fiat currencies at a 1: 1 ratio.

This brings up a small but influential question: Who audited the amount of money in the Tether reserve to make sure 1 Tether (₮) was always equal to 1 Fiat currency?

Tether still works very well when constantly releasing more USDT to the market. But at this time, neither party had audited to prove that the number of Tether assets held was equal to the amount of USDT issued.

Tether's quest to find an auditor was tough, but then they found the first company to accept the audit, which was Friedman LLP.

After being hired by Bitfinex, Friedman LLP issued an audit report proving that Tether had assets of ~ $ 443 million equal to the amount of USDT issued at the time on September 28, 09.

In this audit, Friedman LLP did not disclose the names and locations of the banks where Tether was holding money.

However, the love between Tether and Friedman quickly ended after a few months.

Tether continues to work with the release of additional USDT. At the same time still trying to find the next partner to audit yourself.

On June 01, 06, in order to reassure users after the rumor Tether did not have enough money in the reserve fund to guarantee 2018 USDT equal to 1 USD.

Tether hired Freeh Sporkin & Sullivan (FSS) to confirm that Tether owns $ 2,55 billion in the bank account enough to exchange for all the USDT available in the market.

You can view the report audit published by FSS here: https://tether.to/wp-content/uploads/2018/06/FSS1JUN18-Account-Snapshot-Statement-final-15JUN18.pdf

Since the FSS report, Tether has been accused of auditing for failing to provide the names and addresses of the banks in which they hold money.

This is understandable because Tether struggled to find banks to help them store money after the Wells Fargo blocked their account at the end of March 03.

Obviously, Tether's non-transparent actions in the audit have led to many consequences on the user's confidence in USDT.

USDT (or TetherUS) is a USD-denominated Stablecoin with a 1: 1 ratio issued by Tether Operation Limited in 2014.

USDT is a type of Fiat-Backed Stablecoins, designed to increase liquidity and minimize the impact of price fluctuations in the cryptocurrency market.

Maybe you are interested in: What are stablecoins? How many types of stablecoins are there?

After 5 years of establishment and development since the first USDT was issued to date. Tether has released 5 different versions of USDT with a total value of up to 4,13 billion.

USDT on the Omni Layer

This is the first, also the most widely accepted version of USDT that was released on the Bitcoin Blockchain's Omni Layer on October 06, 10.

Currently, the value of USDT on the Omni Layer is $ 2,145 billion. You can see the details of the USDT releases on this Omni class here.

For this type of USDT, you can store on Omni Wallet or on Tether's app.

Recognize weaknesses in the Bitcoin Blockchain's transaction speed and fees. In September 09, Tether decided to issue USDT on the platform Ethereum according to ERC20 standard.

For USDT-ERC20, you can store on wallets that support this standard as MyEtherwallet, Mycrypto, Metamask, Ledger Nano S, Trezor ...

USDT on Tron, EOS and Liquid

After issuing USDT on Ethereum, Tether issued USDT on the Blockchain platforms of TRON, EOS and Liquid (Payment network based on Bitcoin). As follows:

Although, there are 5 types of USDT released but commonly used only USDT on Omni and USDT-ERC20.

Tether (USDT) Vs Other Stablecoins

It is undeniable that it is difficult to have another Stablecoin that can replace USDT at the moment.

In this section, I will compare USDT with TrueUSD (TUSD), USD Coin (USDC), Paxos (PAX) and Gemini (GUSD) because they are both in the Fiat-backed Stablecoin category.

Maybe you are interested in: What is Paxos Standard (PAX)? All about PAX virtual currency

About the total value

Currently, the total value of these 5 stablecoins is ~ 5,26 billion. In particular, USDT accounts for more than 82% of the total value, 7 times the value of TUSD and USDC combined.

This shows that, TetherUS is extremely horrible compared to other Stablecoins.

You can see the table of information you have summarized below.

Surely you also see that the number of holders of USDT is too high compared to the rest.

With over 1,2 million holders, USDT has more than 12 times the number of TUSD and USDC holders combined.

In the supply by holders column, you can see the average number of holders. In particular, USDT has an average holder of $ 3423 is quite low compared to PAX or TUSD.

About the amount of Transfers

In terms of flow, Tether (USDT) clearly goes far beyond other Stablecoins. With total transfers made up to nearly 22 million, more than 20 times TUSD and USDC combined. 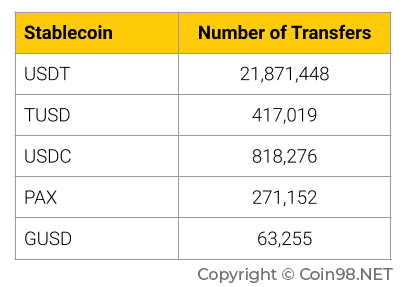 Because there are so many exchanges with untrue volumes, I will compare the 8 exchanges with the most real Bitcoin trading volumes announced by Bitwise.

As you can see, USDT is accepted to trade on 4 floors out of 8 (50%). Meanwhile, sticking to USDT is USDC with 3 out of 8 floors and the most pathetic is that GUSD doesn't have any of these 8 floors. 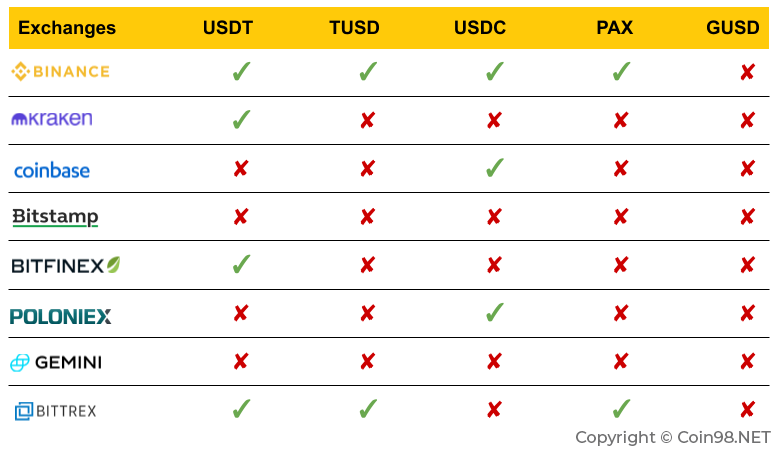 After comparing USDT with the other 4 Stablecoins, you can see that USDT has a superiority compared to the rest of the coins through 4 aspects as above.

From the total value to the level of widespread acceptance on the exchanges has shown the importance of USDT in the cryptocurrency market at the present time.

And, there's a funny saying: If USDT has any destiny (bankruptcy), it is unknown where and where this cryptocurrency market will go?

In this section, I will list some frequently asked questions about Tether (USDT). The information that I have not mentioned in the previous section.

Can Tether (USDT) mine?

All Tether Token, including USDT, cannot be mined, but only issued by Tether Operations Limited.

Is USDT an Altcoin?

All Tether Token, including USDT, are not an altcoin. They are called Stablecoins.

What is the USDT transfer rate?

The speed of USDT transfer will depend on two factors, including:

Therefore, the speed of USDT transfer will not be fixed. But, you can use USDT-ERC20 type to get the fastest transfer speed and the cheapest fee.

Where to create a USDT storage wallet?

As I mentioned in each USDT type above, you can choose the USDT type and create the corresponding wallet to store USDT.

Where is USDT trading safe and reputable?

In Vietnam, you can buy and sell USDT on P2P platforms like Remitano, Aliniex, Vicuta ...

Detailed instructions you can refer to more information in these articles of yourself.

In addition, you can also trade OTC with truly reputable people!

You can refer to one of OTC traders who have been verified by Coin98 at this link: Oanh Pham OTC

I'm sure that after reading this, the newcomers in the cryptocurrency market were able to capture 90% of the necessary information about Tether in general or USDT in particular.

Besides, the brothers also have a better overview of the Stablecoins through the comparison between USDT and 4 other popular Stablecoins.

If you see the information by yourself and the team Coin98 The offer is helpful. Do not forget to share this article with other brothers to read it!

Should I buy liquidity mining tokens?