What is blockchain? Blockchain handbook for newbies (2019)

For those of you who are in the Crypto market, you must be familiar with the term Blockchain. But do you really understand Blockchain and how does it work?

Blockchain is the technology revolving around the Crypto market that we are participating in. Understanding it will help you understand & grasp the nature of Cryptocurrency this.

In this article, let us learn about what Blockchain technology is and how it works. I will try to present it in the most understandable way for you to easily visualize.

Before analyzing the concept clearly, what is the definition of Blockchain? Let's find out about the needs and ideas that made Blockchain come into being. Besides, everything comes from banking and finance.

Here, I take the example of monetary transactions between two A & B people together.

In the old days, when dealing with currencies, borrowing money, repaying debts, people agreed upon each other (between A and B) and recorded that transaction information in a book to store it - called the ledger. And give this book to a reputable intermediary, C. Of course, this C must be both trusted by A and B.

Here, we will see the following participants:

However, this transaction encountered some problems as follows:

The notebook is usually made of paper and it is prone to termites, which break down over time. That is, information stored on it does not exist forever.

Example: A borrows money from B for 12 years. But 10 years later the book was rotting and could no longer see the information on it. At that time, A denied that he had not borrowed money from B, and that B no longer had a notebook to bring as evidence that A had borrowed his money.

Information may be changed or destroyed:

Someone stole the notebook and they could erase some information, or tear off a page. At that time, the information was no longer as original as it was. That means information may be changed.

There is a third intermediary:

It was again held by a reputable third party. And not everyone can easily find a 3rd person to stand for confirmation.

At the same time, the other two traders must have full trust in this intermediary.

Transact via the current banking system

Until the society develops, we have a replacement banking system for the third intermediary person C mentioned above. The paper ledger is replaced by the bank's computer system.

Advantages of the banking system:

However, the transaction via the banking system still has some problems such as:

The risk of data being threatened: Because the bank server contains a lot of important information, it is always the target of attack by many bad guys. Data may still be stolen or altered. 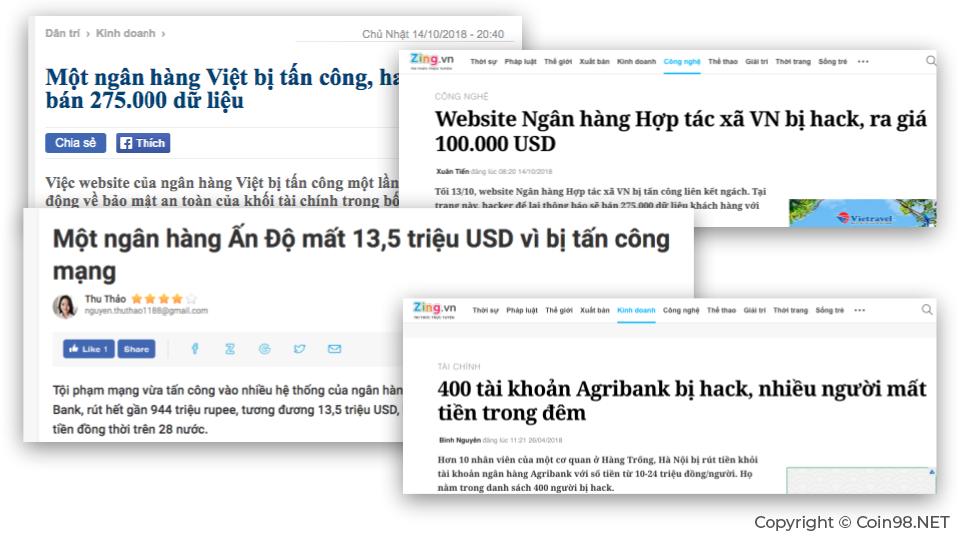 Transaction fee: The charges when users make transfers to each other are also a problem for transactions.

The picture below shows the transfer fee of Vietcombank, updated on 10/10/2019.

Persist third party persist: That is the bank. The user transaction information is held by the bank. In addition, they may exploit, or sell this information to, third parties.

In addition, centralized management systems, banks or the state may require freezing of a user's account. And this is the case that no user wants.

Therefore, Blockchain was born to solve the above problems.

So what is blockchain?

What is blockchain concept?

This information before being entered in the "ledger" will be verified by many people in different places through consensus mechanism.

You can imagine Blockchain as a ledger but an electronic version of it.

The two most important characteristics of Blockchain are Distributed and Decentralized. 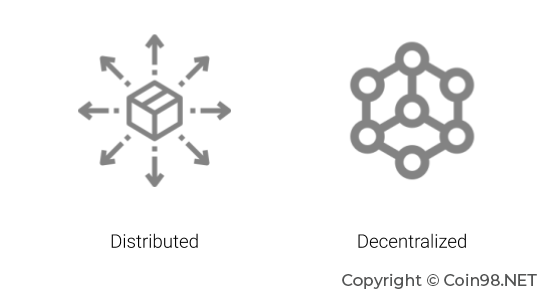 That is, those books contain the same data but are scattered in many different places. So, unfortunately, a place is lost or damaged, the data is still on the Blockchain.

Here, it means that it is not controlled by any organization. Once the information is verified and recorded in the Blockchain, no one can change it. Only the owner of the private key can access it.

These are the two characteristics of Blockchain that make the difference and advantages compared to the current transaction banking system.

So, you have to wonder what the structure of Blockchain is and how it works. Let's Coin98 Find out more!

Maybe you are interested in: 19 The industry will be changed by Blockchain technology

Before going into operation of Blockchain, let's learn about its structure.

The structure of Blockchain

Blockchain, as its name implies, is Block and Chain.

Specifically in its structure, consisting of many blocks. These blocks are linked together to form a chain, we have a block chain or Blockchain.

I will explain below.

Structure of each Block

Each Block consists of at least the following components: Data, Hash and Previous Hash. 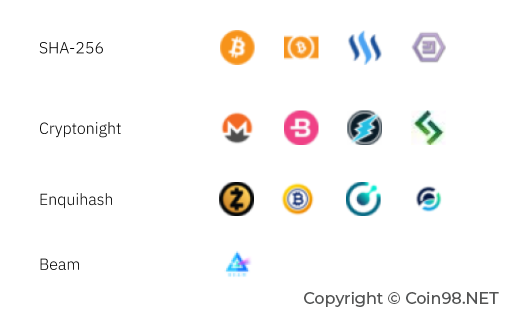 For example, the data inside Bitcoin's blockchain includes the following information:

The hash code of the block. This is a sequence of randomly generated and unlike characters and numbers.

It represents the block separately and is encrypted using an encryption algorithm. The hash code is used to detect changes in blocks.

Hash code of the previous block. It is used for adjacent blocks to recognize which blocks first, which blocks later and connect to each other.

You see the illustration below to understand the structure of Blockchain.

The first block [1] because there is no block before it, its Hash code is sequence number 0. And it is called the original block or Genesis Block.

Whenever new data is created, it is checked and verified by multiple nodes in different places, through a consensus mechanism.

The case if there is a change on 1 block. Here I assume the hacker attacked and changed the information on block A. At that time:

To make it difficult for hackers to attack the system, we have a consensus mechanism.

As I mentioned above, the consensus mechanism is used to confirm and let nodes in the network and homosexuals record new data into the Blockchain system.

If there is a change of a block in the network, it is similar to the newly created data. This data is compared with the data of other blocks. If there is a difference, it will not allow that data to be written inside the Blockchain.

That's how Blockchain is designed to resist data change.

In short, you can understand Blockchain as follows:

There are 2 common consensus mechanisms: PoW and PoS.

PoW (Proof of Work): Also known as proof of work.

In this consensus mechanism, there are miners using miner power to solve difficult problems. Once solved, they will gain the right to authenticate transactions and create new blocks in the Blockchain.

Featured article: What is Bitcoin (BTC)? A comprehensive guide on Bitcoin investment for beginners

PoS (Proof of Stake) or proof of stake.

Typically, there are some projects such as: IOST, Binance Coin (BNB), Cosmos (ATOM), Ontology (ONT)... using this mechanism.

Consensus mechanism PoS there will be no miner miners but instead those involved in transaction validation will have to stake or bet large amounts of coins to gain the right to authenticate the transaction and create blocks.

This mechanism will not require a lot of expensive excavators.

Maybe you are interested in: What is Proof of Stake (POS)? How to mine POS coin?

There are two more terms I would like to introduce to you are Private Keys and Public Keys.

Also known as private / private keys. A sequence of numbers and letters.

It is used to access Crypto wallets & allows transactions. Therefore, users must protect and not disclose the Private Key code to anyone.

Also called the public key, is also a sequence of letters and numbers.

It is considered as the user address on the Blockchain network. Public Key corresponds to the wallet address address.

Brothers and sisters use Public key as email address, and private key as the password of the email so. And the email corresponds to the money or the data inside it.

If you receive mail from other people, you can notify them of your email address. Anyone who has this email address can send mail to you.

The password (private key) is held by you. If this password is revealed to someone, that person can access your email and send mail (transfer money out).

Anyone who has the password (private key) can access that email account and send mail (withdraw money). Therefore, you must always protect this chain of private keys.

So, what are the advantages of Blockchain?

Based on these characteristics, we can apply Blockchain technology in many industries from finance and banking, supply chain, data storage, IoT, voting elections, health services ...

Maybe you are interested in: What is Ethereum? Complete set of Ethereum for beginners

The above is the first in a series of articles about Blockchain technology.

Through this article, you have an overview of this technology, as well as how it works and its characteristics.

So which industries and fields are this technology applied? Invite you to read the following article in the series.

Hello and see you again in the next article!

What is BetProtocol (BEPRO)? Complete set of virtual currency BEPRO

Subscribe
previous Post What is MaidSafe (MAID)? All about MAID virtual currency Next Post What is DEX? Information to know about DEX from AZ for newbies