Following the series of articles about Coin and Token's Coin98. Today, let's find out about Band Protocol (BAND).

What is Band Protocol (BAND)?

Band Protocol (BAND) is a project on Blockchain protocol.

According to the definition of team dev

Band Protocol is a permissionless Blockchain protocol, aimed at creating "token-curated communities". In short, communities are regulated and monitored by the token mechanism. In particular, each token is personalized.

Members of the Band Protocol ecosystem (whether developers, companies, brands, or celebrities) can issue tokens specifically for their community for the purpose Data management in their community.

These community tokens are issued to motivate community members to contribute good, reliable data in the community.

The goal of the dev team

Their goal is to become the world's leading decentralized database repository - where all decentralized programs or applications can rely on reliable data sources.

According to the definition of Coin98

Band Protocol (BAND) is a Blockchain protocol project in the field of data management. It is the layer layer of Web 3.0, which solves data problems, reliability and quality of data information for Web 3.0 applications.

Within the Band protocol, they use the Band's public Smart Contracts to allow data to interact without going through oracles outside the Blockchain.

You can refer to the article about chainlink of Coin98 to understand Band Protocol model. These two projects can be considered to provide the same solution related to data problems in Blockchain.

Useful articles for you: What is ChainLink (LINK)? Full episode on virtual currency LINK

Note: Oracles means the genius or the wise man originally. In computer science (or commonly used Blockchain projects), Oracles is defined as a part or system that receives information / events that occur in real time. Thereby providing real-time accurate information for the relevant departments to promptly react.

What does Band Protocol (BAND) solve?

Some issues raised by the dev team:

Smart contracts cannot access data on their own and there is no simple way for Dapps to receive information outside the Blockchain.

And even with the solution, it still has technological barriers for developers to access and use.

The issue of reliability of information

Information sources and data in the current community are having reliability issues.

If the incentive and motivation mechanism is not attractive enough, the information provided to Dapps will be vulnerable to lack of authenticity or low quality of information. From there directly affect the activities of these Dapp.

What is Band Protocol (BAND) solution?

To solve the above problems, Band Protocol creates a framework for community data management. 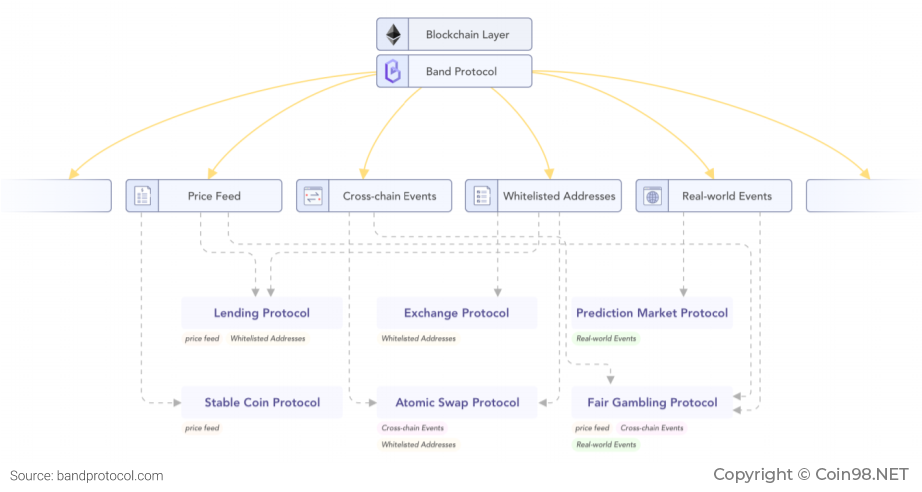 You can understand Band Protocol as a bridge between Dapp decentralized applications and real-world data. They guarantee that the data when it is put into Blockchain will be completely reliable data through economic incentive mechanism.

The data set within Band Protocol will be divided into several sections called "Dataset Governance Groups". Each of these groups will have their own tokens to stake and manage through two mechanisms Token-Curated Registry or Token-Curated Data Sources.

In the beginning, the Band protocol will be built on the foundation of Ethereum and enable its solution for Dapps on the Ethereum Blockchain.

They will then have their own Mainnet and run on their Blockchain to allow interaction with many other leading blockchains.

What is BAND Token?

BAND is the Native Token (or coin) within Band Protocol. The original BAND token will be ERC-20 on the Ethereum Blockchain.

Later as the State Protocol's ecosystem evolved into other major blockchains like EOS, NEO BAND tokens will also be issued on these platforms and swapped back and forth at a 1: 1 ratio.

The purpose of BAND token use will be explained in detail below. 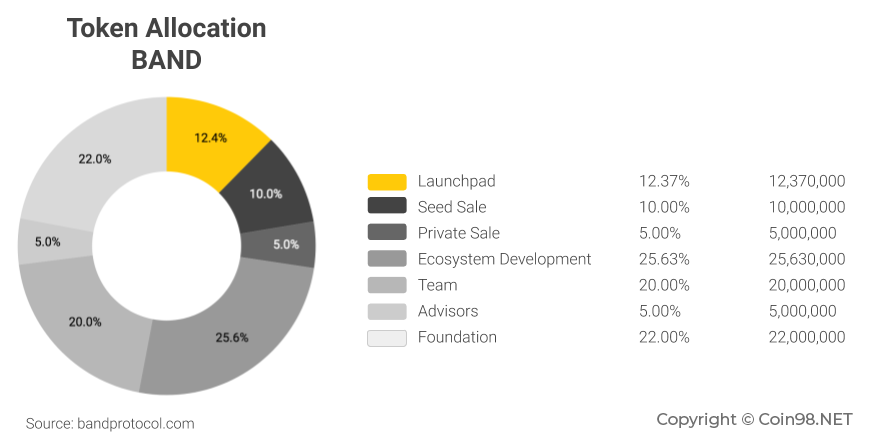 This is a small comparison of the allocation and return of tokens of BAND and PERL at the time of listing on the exchange. 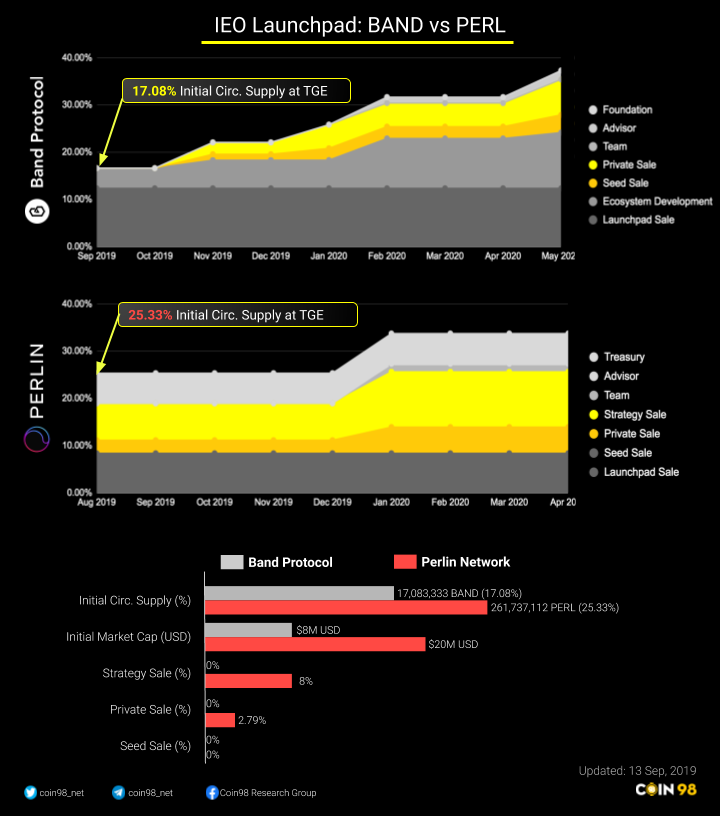 Pay attention to the following parameters:

As shown in the distribution and payment of the token as above, you can clearly see that at the first time of listing, PERL is paid for Launchpad Sale, Private Sale, Strategy Sale.

The number of tokens purchased at different price levels that are listed on the exchange at the same time will have a significant impact on PERL's performance at the floor list. You can reopen Perlin's price history to get to know it.

Coin98 There has been a separate discussion post on this topic here, you can join us.

What is Band Protocol (BAND)?

In this section, I will share more details about the composition and how Band Protocol works.

Band Protocol consists of many Data groups, each of which owns its own Dataset token. Dataset token holders can participate in the community governance mechanism (I will discuss in more detail below). At the same time, they also receive a reward from their contribution.

In the Band Protocol operation mechanism, there are two types of tokens: Dataset token and BAND token.

Dataset tokens: ERC-20 tokens issued by governance group (also known as the governance of the group). Anyone who owns the Dataset token can participate in community activities.

Dataset tokens holders will have 2 jobs: 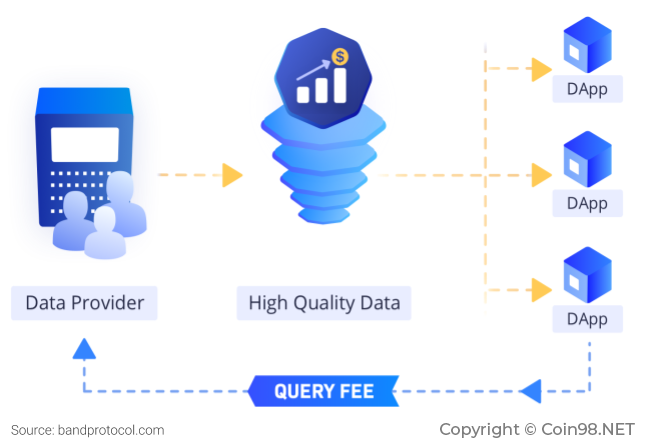 Data providers will receive a BAND reward from providing information to Smart Contract. At the same time, the voter or staker for that Data Provider will also receive a reward.

This mechanism encourages the more people to vote for good providers, the better the information and the more rewards they receive.

BAND token: Considered a mortgage token. Users who want to own Dataset tokens must use BAND tokens to purchase. 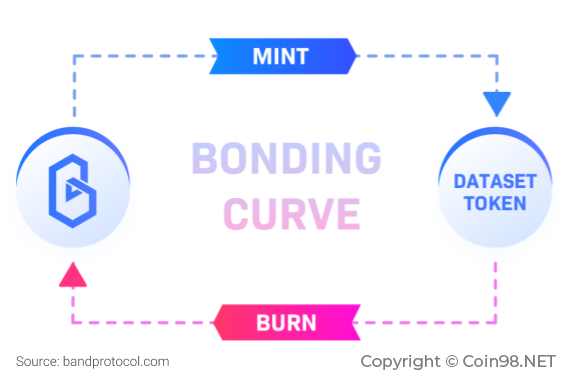 What is BAND Token used for?

As a Utility Token, BAND is used for the following purposes:

As I mentioned above, every community will have their data. And to motivate the provision of valuable community information, the Band Protocol (BAND) issues its own Community Token Datasets. BAND token is used as collateral for the above Dataset Token.

Anyone can buy a Dataset Token by sending a BAND token to the Data Governance Group. Therefore, it can be considered that BAND is a token of liquidity and circulation for data or Dataset Token. They can resell Dataset Token to get back BAND.

Stores the value of all Dataset

As explained by the project, in order to own the Dataset Token, users must take BAND as collateral.

Use BAND token to participate in governance mechanisms in the future

Stakeholders can use the BAND token to vote for future upgrades of the system.

The BAND token will initially be issued according to the ERC-20 standard on Ethereum. Therefore, when trading on exchanges other than withdrawal fees, exchange fees of the exchange, you also incur a small fee of tx fee on the Ethereum Blockchain network.

How to earn and own BAND Token

Band Protocol has not officially announced the public sale round. You can wait to buy BAND when they sell ICO / IEO next time.

In addition, in the Band Protocol mechanism, there are token holders. They are responsible for managing the quality of the parties within the TCR (Token Curated Registry). These people will receive BAND rewards for doing the above.

If you want to contribute directly in Band Protocol's ecosystem, you can do the above task and receive BAND.

How to mine BAND Token?

You cannot use the power of a miner to mine a BAND token like BTC or ETH.

BAND is ERC-20 so you can store it on wallets that support this standard:

In addition, Band Protocol also has their own wallet, Band Wallet.

At the moment, the most active exchange trading Band Protocol (BAND) is Binance.

Maybe you are interested in: What is Binance? How to use Binance Exchange?

The future of BAND Token

Let me remind you first of Band Protocol's working model. Their solution is to provide a bridge between external data sources to put into Smart Contract - interact with Blockchain.

Each community "has" an ecosystem to their own Dataset token to operate (currently the test is having Web Request Oracle, Financial Data Feeds, Sport Data Feeds and Lottery Data Feeds). BAND tokens can only be used to buy and exchange.

The role of the Dataset token (Utility Token) is essential and only it can operate the ecosystem of each Community. From there, we see the needs of the BAND token depends on the need to own the Dataset token.

That is, the more communities in the Band Protocol's overall ecosystem will attract more and more Community, the demand for Dataset tokens will increase, thereby affecting the purchase demand of BAND.

Should you invest in BAND Token?

Currently, the project is in the Testnet Kovan phase. There are 4 Dapps running on their Testnet.

In the future, when the project officially launches and Mainnet, investors should pay attention to the development of the communities participating in this Band Protocol. 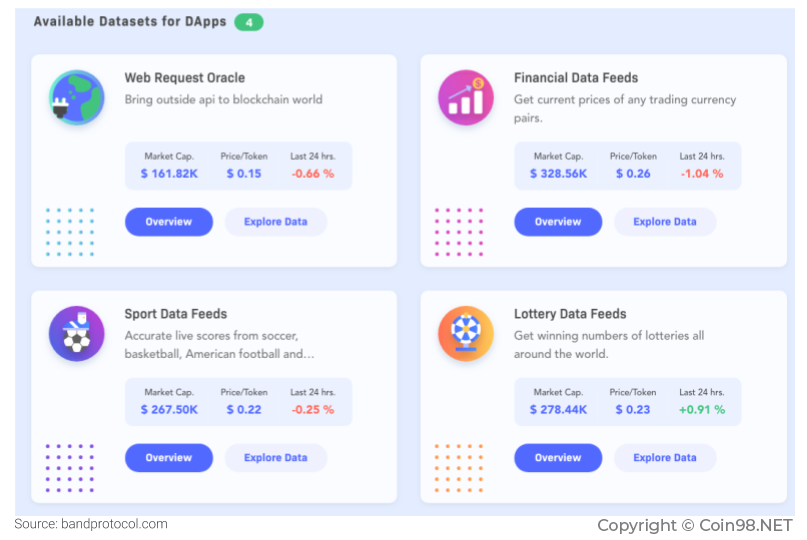 The current project has not updated their specific roadmap yet nor has it released a public sale token sale schedule. I will update when information is available.

BAND is Utility Token. As I described above, Band Protocol also has Dataset tokens.

At the user level, they will probably use Dataset tokens more. But from an investment perspective, you need to care about BAND. It is a mortgage token and only BAND owners can participate in the Band Protocol's ecosystem.

Through this article, hopefully you have an overview of Band Protocol and BAND token.

The project has not announced the public sale schedule yet, so in the article some content related to the token I have not included. When there is official information, I will update you soon.

If you have any questions, please leave a comment below the article for me and the team Coin98 and I can answer in the shortest time.

Do not forget to join the discussion with 12.000+ brothers in Coin98 Finance.

You can learn more about the project at the official channels of Band Protocol Vietnam:

Goodbye and see you again in the next article!

Sushiswap: What is that and next steps in SUSHI