Only one more month, Bitcoin's 4-year judgment day will come. The event has caused a fever of the cryptocurrency market community during the past time - Bitcoin Halving 2020.

Will Bitcoin increase in price after this Halving event? Or is this just an excuse to the community FOMO?

In this article, I will go with you to find out about the probabilities of Bitcoin after this Halving event!

OK, got it Let's get started!

What is Bitcoin Halving?

Bitcoin Halving is an event that halves block rewards that happen every 4 years Bitcoin.

During existence, Bitcoin will have a total of 32 Halving after every 210 thousand blocks were created.

And so far, Bitcoin has undergone Halving twice in 2012 & 2016. And Bitcoin will officially go to Halving for the third time near the end of May 3. 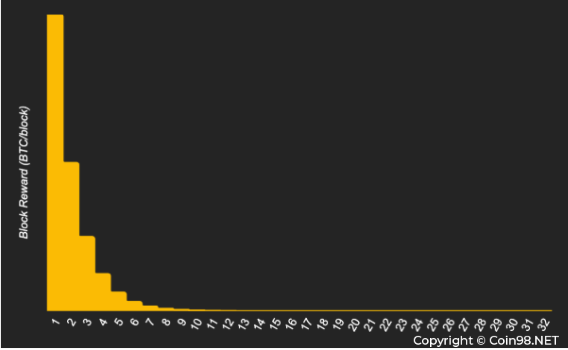 Why is Bitcoin Halving important?

Although Bitcoin creator Satoshi Nakamoto has never revealed any information about the purpose of Bitcoin Halving.

Since then, the guarantee of "network security" will have to be switched based on "transaction fees" instead of "block rewards" as it is now.

Why this shift is good, I will explain below:

After each Halving, Bitcoin will halve the block reward. This led to a decrease in the supply of the market, leading to a year-on-year decline in Bitcoin's inflation rate to 0 after 32 halving. 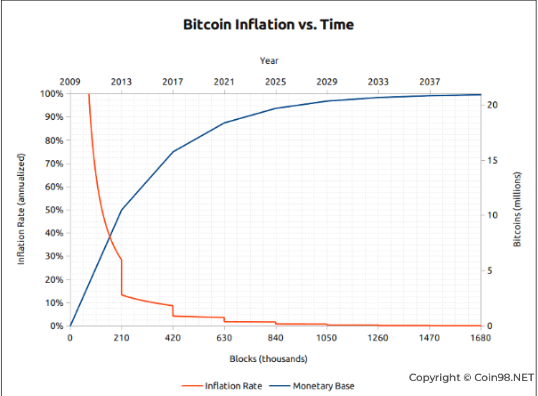 When inflation falls very low, lower than USD inflation, Bitcoin will gradually become a store of value instead of current currencies.

The main component doing this task is the Miners (miners). But it was this component that was most affected when Halving happened.

Because a reduction of khối of the block reward means a reduction in profits ½. This led to a drop in miners in the Bitcoin network shortly after Halving happened.

This will help purify the mining market, when individuals and organizations have insufficient resources and vision will leave the game on its own. Instead, it is a new generation of miners with a longer-term perspective on Bitcoin.

Because of the benefits of validation, network security will gradually be based on transaction fees throughout the network.

That means that Bitcoin must be used worldwide.

By May 05, Bitcoin will undergo a 2020rd Halving of its 3 Halving sessions.

Before it happens, you will review the history twice with Halving together. See what information will be able to repeat this time or not!

The first Halving event of Bitcoin took place and in November 11 at block 2012. Block rewards reduced from 210,000BTC to 50BTC for each block mined.

Data from the first Halving show: 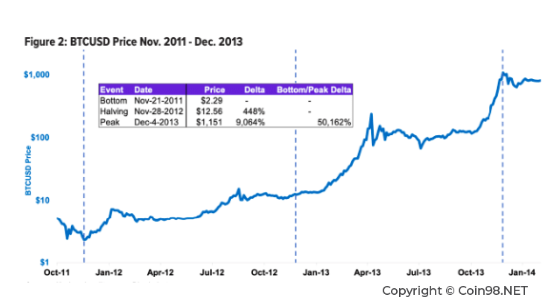 The price chart above shows that Bitcoin started bull market (strong growth) before the Halving event a year (November 11) and lasted until after Halving a year in November 2011.

Shortly thereafter, Bitcoin entered a downtrend with a 80% reduction in value exactly a year later.

This shows that the amount of miners has decreased quite a lot after halving occurred.

Shortly after Halving took place, the Bitcoin mining profit immediately decreased by more than 60% and it took two months to recover to the original level.

During this time, the emergence of specialized ASIC miners pushed Bitcoin mining process up to 150 days faster.

The second halving will reduce block rewards from 25BTC to 12.5BTC for each mined block. 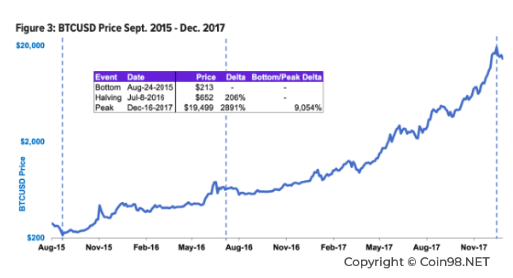 The chart above shows that Bitcoin price entered the bull market 9 months before the Halving event until the year after Halving.

The earlier bull market can be affected by the time Bitcoin Halving 150 days earlier than the first.

After Halving, Bitcoin's hashrate has only decreased slightly this time around as if nothing has happened.

This proves that the number of miners participating in the network has expanded quite large and still believes to exploit Bitcoin.

Bitcoin mining profits fell ~ 51,2% after Halving took place and it took nearly 10 months for this profit to recover.

As expected, Bitcoin will halving for the third time in May 05 and cut the block reward from 2020BTC to 12.5BTC for each block.

This is the event that the community of cryptocurrency investors eagerly awaits and is considered a hit to the Bitcoin price rise again.

However, will Bitcoin Halving 2020 cause Bitcoin to rise?

You refer to the factors below to make your own judgment.

As you can also see, Halving twice before Bitcoin's price consistently hit a record high, breaking the peak just a year after Halving happened.

However, a year may be too long in this cryptocurrency world. So my brothers and I look at Bitcoin's price movements before and after three months from Halving.

Coin98 Research data shows two halving in advance, if you buy before 90 days and as soon as Halving will hold the price increase ticket.

Currently, Bitcoin has 30 more days before going to Halving. Do you think Bitcoin will surpass $ 10,000 before Halving?

Stock to flow is the ratio that quantifies the scarcity of an asset. It is measured by dividing the total circulating supply supply (stock) by the amount of annual production (flow).

Bitcoin is referred to as "digital gold" with increasing scarcity after each halving.

You can probably expect Bitcoin's SF to reach 55,94 and be asymptotic to gold after this third halving. 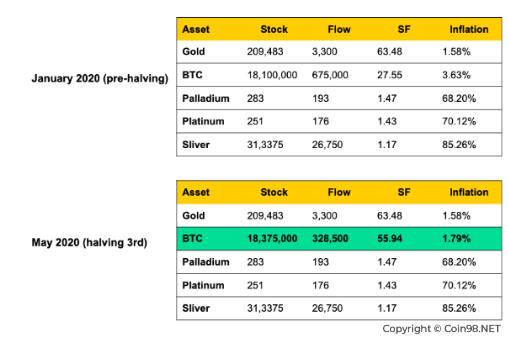 But, will the SF scarcity index lead to a sharp increase in Bitcoin's price as gold has done for several thousand years?

Contrary comments: Recently, JOE007 a Bitcoin whale has stated that the SF pricing model is meaningless.

He said that the statistical probability is only correct when there is no change from outside influences. But if so, what?

Do you think it is still true to predict Bitcoin price based on SF index?

The amount of whales increased sharply

In the latest report, Glassnode an on-chain data analytics unit has shown that the number of whales holding Bitcoin is increasing sharply. 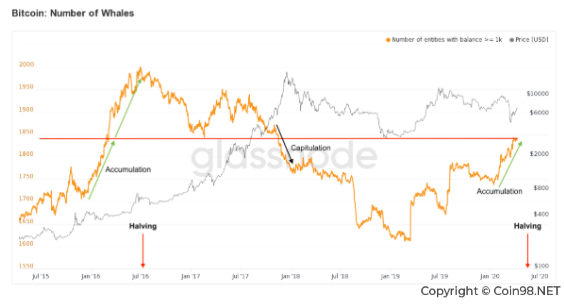 The chart shows, the number of Bitcoin whales tends to increase sharply (~ 17.65%) before six months when Halving takes place in 2016.

Back to the present, from the beginning of the year until now the amount of whales is on the rise. And especially after March 12 when Bitcoin had its dark day with a ~ 3% discount within a day.

This period is very similar to the previous Halving period. Do you think, this is a good sign before Halving?

This third Halving time is different from the previous two times because of the approaching appearance of the economic crisis approaching.

Bitcoin was born after the 2008 recession and it hasn't really experienced a crisis yet.

During the crisis, all financial industries dropped significantly and Bitcoin was no exception.

The chart below shows that the Bitcoin price (yellow line) is moving quite close to the SP & 500 stock index (blue line) in the last drop. 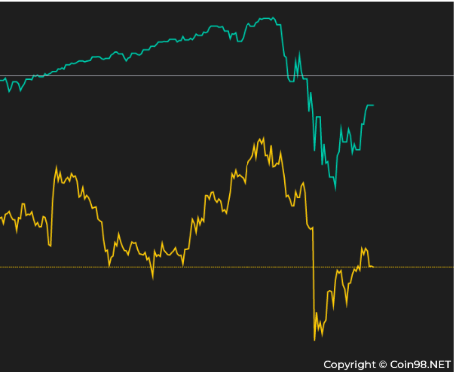 Hopefully, through this article, you will have a better overview of the upcoming Bitcoin Halving. Based on the data of the past and the present situation, you are able to make the right decision for yourself.

If you have thoughts and opinions on this matter, you can comment below the article. I and the Coin98 team will discuss more with you.

If you have any questions, join us in the discussion Coin98 Finance Please!

Hello and see you again in the upcoming article.