What is Bitcoin SV (BSV)?

Bitcoin SV or Bitcoin Satoshi Vision (code: BSV) is a peer-to-peer cryptocurrency. Allow users to send directly from one party to another without going through any intermediary financial institutions.

Stop! Can you read this definition and can you guess what coin it resembles?

Right about that! It is very similar to the definition of Bitcoin (BTC).

According to the homepage of Bitcoin SV, they RECOGNITION that:

The new Bitcoin SV is the same coin that retains the original value of Bitcoin, not Bitcoin Cash (BCH) Bitcoin (BTC).

Why was Bitcoin SV born?

To answer this question, my brothers and I go back to the period of 1 year after Bitcoin Cash formed.

Those were the first days of August 08, Bitcoin Cash (BCH) propose a protocol upgrade version on their block chain, including:

With the application of CTOR, transaction orders in the Bitcoin Cash network will be processed in order of ID, thus improving the transaction speed.

Maybe you are interested in: What is Bitcoin Cash (BCH)? Complete focus on the virtual currency BCH

In the proposal, it was also proposed to activate a new opcode, OP_CHECKDATASIG, an activity code that can communicate with external information. Blockchain.

As such, with OP_CHECKDATSIG enabled, Bitcoin Cash will have more Oracle capabilities on its network.

But, a group of miners in the Bitcoin Cash community, led by Craig Wright and Calvin Ayre, objected to this update.

And when both sides do not have a common voice, Hardfork is the inevitable consequence.

The beginning of Bitcoin SV

It comes from the lack of a common voice in the Bitcoin Cash network upgrade.

On November 15, 11, Bitcoin SV was born after the successful hard fork from Bitcoin Cash's block chain at block 2018.

At that time, there were more than 16.8 million BCH in circulation. This means that there will be about 16.8 million BSV will be circulated in the market after the hard fork successfully.

It was thought that everything would be peaceful after a successful split.

However, Craig Wright and Calvin Ayre started the fight with the goal of destroying Bitcoin Cash's block chain through a 51% attack.

Of course, Roger Ver and Jihan Wu did not stand by and watched as Bitcoin Cash's block chain was attacked.

According to estimates by BitMEX Research, within 7 days of the war, the total damage of the war amounted to $ 5.94 million. 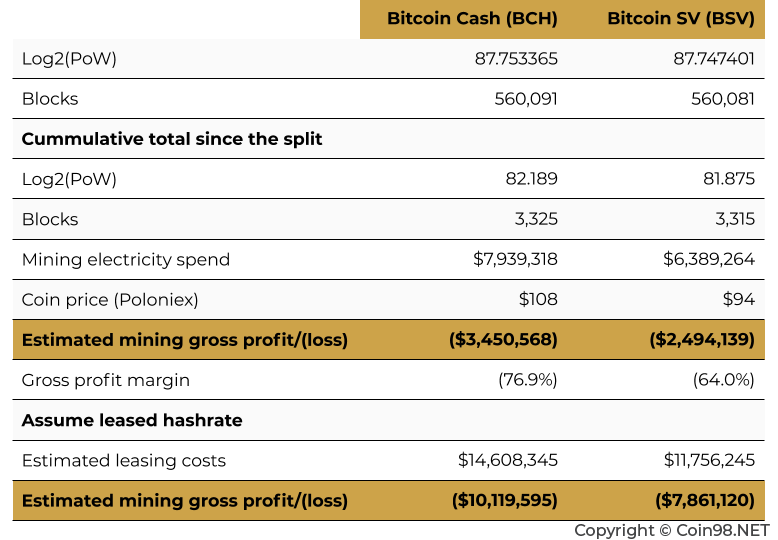 Finally, after 10 days of fighting, Bitcoin SV decided to end this expensive match. 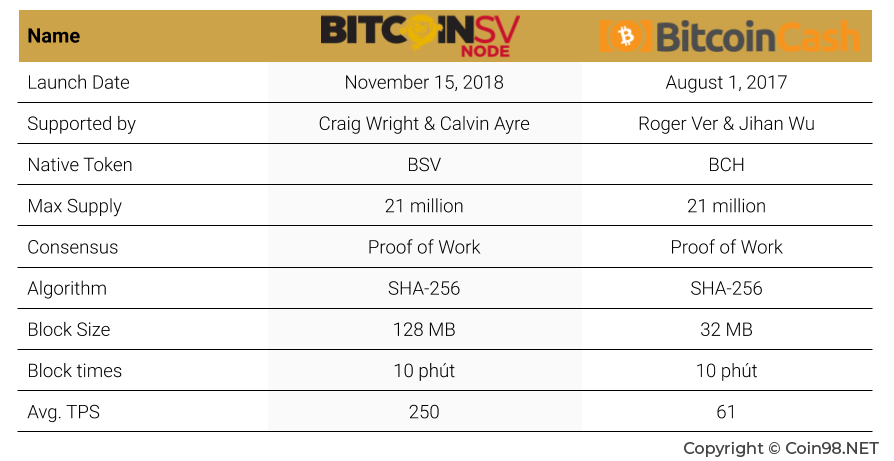 The most obvious difference is that the block size of Bitcoin SV is much larger than that of Bitcoin Cash.

Because of the large block size that leads to the ability to store more data in a block, more space for transaction processing makes Bitcoin SV transaction speed faster.

Since then, the transaction fee of Bitcoin SV is very cheap.

Purpose of use of Bitcoin SV (BSV)

BSV is designed for use in the Bitcoin SV network and ecosystem, including:

BSV is used to pay for transaction fees in the Bitcoin SV network. This fee is currently quite cheap, only about $ 0.0007.

BSV is used as a block reward for miners when they mine a new block in the Bitcoin SV network.

Currently, this block reward is at 12.5 BSV per block and will be halved after Bitcoin SV starts Halving in 2020.

BSV is also used as currency in stores, partners accept BSV as a means of payment.

Currently, the number of stores that accept to use BSV to pay has not been accurate statistics.

How to mine Bitcoin SV (BSV)?

Like Bitcoin Cash, Bitcoin SV uses the SHA-256 algorithm, so you can dig and mine BSV with miners like CPU, GPU or ASIC.

Although it is possible to dig with the above machines, if you want to exploit profitably, ASIC excavators are the best choice.

Because you also know that mining is a hashrate competition and to have a large hashrate requires high speed and computing power. And ASIC excavators have better computing power than the other two types.

Currently, there are two common ways of mining BSV: Digging your own BSV (solo mining) and mining BSV through the prestigious BSV mining pools (pool mining).

Depending on the ability of the brothers, choose the appropriate method of exploiting BSV.

At the present time, you can store BSV on wallets developed by third parties such as Atomic Wallet, Coinomi, Exodus, ElectrumSV, Edge ...

In addition, you can also store BSV on the exchange REPUTATION to facilitate the Trade. However, you should not put too much on the floor.

Despite being many major exchanges like Binance or Kraken support listing after the split.

But, Bitcoin SV was suddenly delisted by Binance on April 22, 04, shortly after Kraken also conducted delist BSV on their exchange.

Currently, BSV is being supported for trading on over 59 large and small exchanges.

With the average total trading volume over the past 30 days reaching more than $ 615 million, shown liquidity BSV's at the present time is very good and stable.

In particular, BSV is being traded the most on BigONE floor.

Maybe you are interested in: What is BigONE floor? Instructions for registering and using BigONE floor from AZ

In this section, my brothers and I predict the future of BSV copper through on-chain data on Bitcoin SV's network.

You can see clearly, the number of active wallets per day on the network of Bitcoin SV fluctuates continuously with a wide margin.

Demonstrate instability of the network, although the number of active wallets increases over time.

You see that the number of transactions in the network of Bitcoin SV tends to increase but with a very strong amplitude of fluctuations.

During the last 10 days of April and early May, the transaction volume on Bitcoin SV network suddenly dropped by over -4% from 5 thousand to about 95.68 thousand transactions per day. 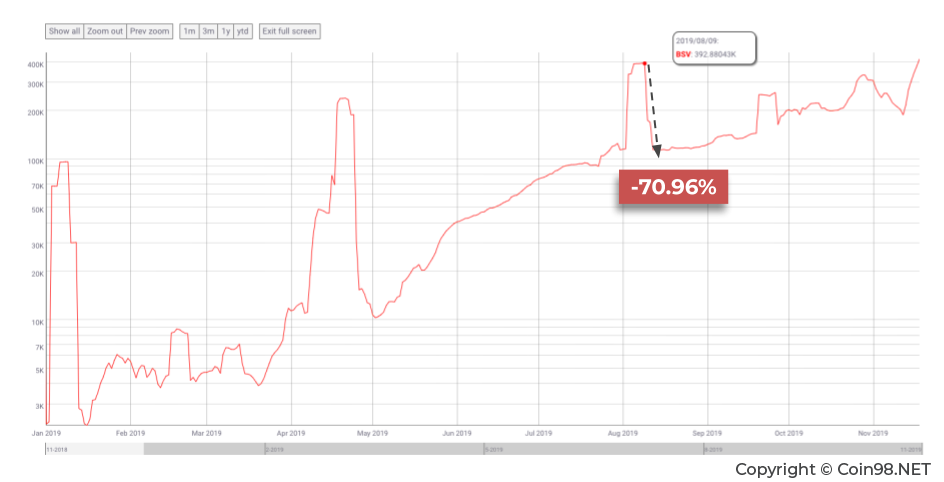 If you look at the whole, you will see the relationship between the number of active wallets, the amount of transactions, and the price.

Below, you see that, as the number of transactions, the number of wallets active on the network decreased around the beginning of May. The price of BSV also increased sharply from $ 5 to $ 50.72, equivalent to about + 225.92%.

Should Bitcoin Bitcoin (BSV) be invested?

I believe that when you read up to now, you have fully grasped the most necessary information about Bitcoin SV (BSV).

Hopefully, from the information provided in the article, you can identify for yourself the opportunities and risks before making a decision to invest in BSV.

Coin98 will continue to monitor and update the latest information on the Bitcoin SV project.

Disclaimer: The article is intended to provide information about Bitcoin SV (BSV) and is not considered investment advice. Invest Cryptocurrency is a form of risky investment, you only participate with capital that can be lost.

Bitcoin SV has always claimed that they are Bitcoin's block chain and even the leader, Craig Wright identifies himself as Satoshi Nakamoto.

However, these are just false things, exchanging concepts, misleading for newcomers to the cryptocurrency market in general and Bitcoin in particular.

It is this, which makes a bad impression for Bitcoin SV in the cryptocurrency market community.

Do you think: Can Bitcoin SV regain lost trust in the cryptocurrency community in the future?

Let your comments in the comment section at the end of the article, I will discuss with you more about this BSV.

And, if you see the information by yourself and the team Coin98 The offer is helpful. Do not forget to share this article with other brothers to read it!

Hello and see you again in the upcoming article!

Subscribe
previous Post What is Bitcoin Cash (BCH)? Complete focus on the virtual currency BCH Next Post How to Buy and Sell Huobi Token (HT) on Aliniex