On July 10, 07, The Wall Street Journal reported that the Blockstack project was the first project approved by the SEC (US Securities Commission) to sell tokens in accordance with A + regulations.

This A + regulation is considered as an alternative to IPO, enabling businesses to offer to receive investments early.

Perhaps because this A + level is just below the IPO, the information and papers that Blockstack makes available to investors to learn about the project are equally massive.

188 is the number of pages that Blockstack's Offering-circular document (released on July 10, 07) provides readers with besides categories, sub-domains and communication channels for the public to learn.

Of course, within the framework of this article about Blockstack, I will not try to put all that information here.

In this article, I will discuss with you the Blockstack project, what do they do? What are the areas and problems they solve? How are their tokens? And especially where our investment opportunities are in this project.

What is blockstack (STX)?

According to the definition of team dev

Blockstack is a Full-stack decentralized computing network for new generation applications. There, developers and users can participate fairly and securely.

Blockstack's network uses Blockchain technology to build protocols and tools for developers. It helps Digital Rights (rights in the Digital World) return to the right developers and customers.

The goal of the dev team

This is to allow all Users to own their own data. Users can transfer data from one application to another within the project ecosystem.

With Blockstack ID, users can completely bypass the login to their personal data via password as before. The ultimate goal is to bring privacy, security and freedom to users.

According to the definition of Coin98

Blockstack is a blockchain project. They apply Blockchain technology to create the infrastructure on which developers can easily deploy their applications.

At the same time, users can fully own and decide their personal data on those applications.

Details of what we (end users) can do on Blockstack, I will explain below.

What is STX Token?

STX is the Native Token (or coin) within the Stacks Blockchain.

In Blockstack's ecosystem, STX is used as a Utility Token with the following purposes: payment of fees, transaction fees, as well as rewards for developers.

It plays an important role in creating motivation for all parties to participate in the activities of the Blockstack network.

In the sections below, I will explain more clearly how the components interact with the STX Token.

Notice: Currently 11/07/2019 has not been put into circulation on exchanges. 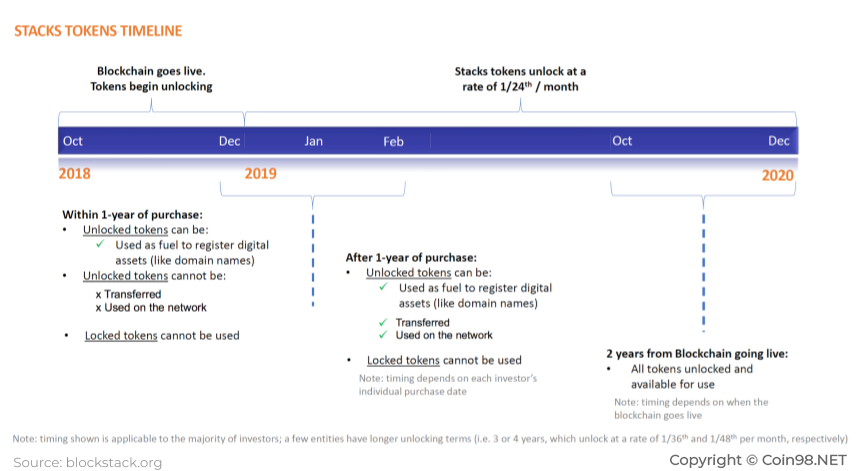 This part I am checking with the project side for more details.

What is Blockstack (STX)?

To make it easier for you to imagine this project, I will explain more clearly what we can do with Blockstack.

If you are a normal web user?

On browsers or applications in today's basic ways. Your information and data will be stored on Cloud Storage by 3rd party service providers.

Some laws on personal data you often see these parties show up for users to check the box "Agree".

However, all this data is on their storage system and no one knows them - whether those third parties have access to or sell it to another 3th or 1th party.

If you use applications built on the Stacks Blockchain, you have complete control over this data.

Please refer to the comparison below to understand more about the services and applications Blockstack is providing. 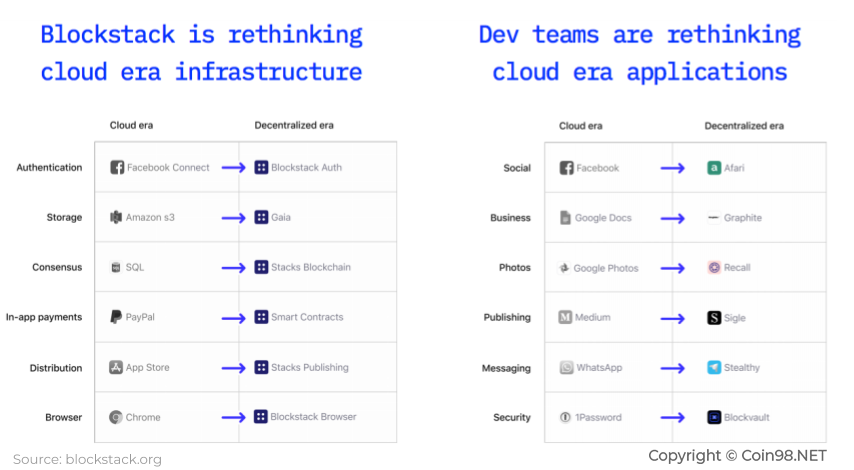 So how to start using Blockstack applications and browsers?

To start using Blockstack's network, you first need to have Blockstack Identity, or ID and do not need any account or password.

Blockstack Identity includes Identity and Secret Key (or Private key). Only brothers with IDs can access the data.

In terms of user data, as I mentioned above, you can store it on your personal computer or use the services of the Providers.

These Providers are developers or organizations who use Blockstack's Gaia Storage System to provide services to End Users. Only users with Secret Key can access, Providers only act as Host.

For Developers, which benefits do they develop applications within the Blockstack ecosystem?

To encourage developers to actively participate in developing and upgrading their applications and games on the project network, the dev team uses the App Mining Program.

In particular, when Developers create applications, they will receive STX Token Rewards from the system. These tokens will be created when new App is born. So they named it the App Mining Program.

What are STX tokens used for?

STX is the Native Token (or Coin) within the Stack Blockchain platform.

Inside Blockstack's ecosystem, STX is Utility Token with the following specific uses:

According to the team dev, at the present time (July 07), transaction fees in their Blockchain network will be paid in BTC.

In the next version of Stacks Blockchain, Transaction Fees will be paid by STX Token.

Featured article: What is Bitcoin (BTC)? A comprehensive guide on Bitcoin investment for beginners

How to earn and own STX Token coins

At the time of writing this article, STX Token has not been officially listed on any exchange.

However, if you want to buy STX Token always, you can access their website http://stackstoken.com/ to buy with BTC, ETH or US Dollar. Buying time is from July 11, 07 to September 2019, 09.

Also, if you are a developer, you can build App / games on Stacks Blockchain and get STX Token Reward.

According to the Blockstack team, 1.32 billion STX Tokens were generated from the Genesis Block. And, it will diminish in number over time as it is burned from some of the above "fuel" activities.

STX is the Native Token of the Stacks Blockchain, it is stored on a private wallet called Stacks Wallet.

You can refer and download this Stacks Wallet wallet here: https://wallet.blockstack.org/

Currently, STX Token is not traded on any exchange yet. I will update information about the trading floor when there is official news from the project.

The future of STX Token

Based on the tokenomics model mentioned above, the components that directly use the STX Token inside the Blockstack ecosystem include end users, developers.

In particular, the end-users can account for the largest number. To use the applications and services inside Blockstack, they are required to have STX Token for registration fee to create the original ID.

In particular, the amount of this STX Token will be burned. As such, the demand to buy STX used by users and developers will increase as the number of these people increases.

Should invest in STX Token

Blockstack proceeded with the Mainnet. At the moment, there are 172 apps built on the Blockchain Stacks.

In Q3-4, 2019, Blockstack will start their App mining program to encourage more developers.

There are currently 172 apps. Some updates related to the STX Token are as full features of Smart Contract.

You can find out more here: https://blockstack.org/roadmap

STX is Utility TokenEnd-users, developers are those who want to own STX Token to serve their purpose in Blockstack Ecosystem.

In addition, the project currently has a very high hype level when the SEC has just approved the sale of Token under A + regulations so it is likely to lead to FOMO psychology. You should pay attention to this matter.

Based on the above information, you should learn more about the project and token before making your own investment decisions.

Hope you receive a lot of useful information through the last article.

In this article, I focus on clarifying information related to STX Token and how components use it in Blockstack's ecosystem.

If you want me to make another more detailed article about all ecosystems in Blockstack then leave a comment below the article!

How would you rate this project? How do you think about the project's tokenomics and how do you decide to invest with the project?

Do not forget to join the Coin98 Research Group discussion groups on Facebook, Telegram.

The article references official sources of information from the Blockstack project such as website blockstack.org, whitepaper, Telegram Channel.

In the article, some information I have not yet learned, if you have official information, please share it with Coin98 .

Goodbye and see you again in the next article!

What is AMM? How does AMM work for Defi?

Sushiswap: What is that and next steps in SUSHI