DAOs is an organization operated by members based on a coded set of rules (this rule set can be consensus or smart contract).

Easier to understand: It can be thought that many groups of people work together in a set of rules to achieve a common goal, and there are rewards for each person involved in the process.

Governance DAOs are the most common type in blockchain, because they include blockchain platform, and Protocol.

It is a decentralized operation of Miners/Nodes, with the common task of verifying transactions, validating new blocks, and ensuring network security. In return, Miners/Nodes will receive rewards with native tokens.

Like Bitcoin: It is considered as a primitive DAO, with incentives and fee rewards for miners in exchange for miners who need to perform operational activities such as mining new blocks, confirming transactions, and ensuring security. Thus, Bitcoin can exist, and be operated without a centralized entity.

Token holders have the right to vote on important decisions such as protocol development.

Typical example: Kyber Network launched KyberDAO to create incentives for Stakers (token holders) like receiving transaction fees arising from Kyber Protocol, and voting for proposals to improve protocols. Once the proposal is approved, it will be implemented into Kyber's protocol.

Unlike governance, Shared-base DAO is a non-profit or for-profit organization, company, or operation fund.

Members will use shares to vote on the activities of the organization.

In return, members will receive equity, and dividends of for-profit organization. Or they get nothing from non-profit one.

In order for you to become their member, different shared-base DAOs will have different requirements.

Typical example: The LAO, a VC DAO in which capital contributors will receive shares proportional to their contributed capital, and will have rights to vote or propose projects for other members of The LAO to vote, and consider whether to invest in or not.

To create 01 DAO easily, protocol projects, organizations, companies, and so on can use services to create DAO quickly (less than 5 minutes) like Aragon, DAOStack, or Daohaus.

Related to the problem of smart contracts, once DAOs have been deployed (deployed), they are very difficult to change; the activities must take place in accordance with the provisions of SC. In addition, the security of smart contracts is also a serious issue, typically The DAO hack.

The legal framework for DAO is really unclear.

If the DAO is not legally binding, it will create a big barrier to the application of DAO, because the participants will have to take legal responsibilities.

“If you don't formalize a legal structure for a human-created entity, courts will impose one for you. And a general partnership, unless properly formalized or a deliberately created structure, is a very bad thing. ”

DAOs allow members to vote democratically. Many decisions are complex and scholarly, but many voting people may not understand, or know what they are voting on.

This can lead to bad decisions, because most people don't have the knowledge of the decisions involved.

It is an entity or organization having a higher voting power than other members, which creates a centralized feeling right in the voting of the protocol.

The most conspicuous example today is Kyber Network (Binance), and Compound (a16z), both of which are also having this problem.

Maybe you are interested in: What is Compound (COMP)? All about COMP money

Some thoughts about future of DAOs

Currently, it is clear that DAOs are moving to protocols, and tend to thrive when the protocols all use DAOs.

Also from that demand, many services providing practice solutions for DAO such as Aragon, daostack, daohaus, etc. are on the rise.

It is predicted that in the near future, these demands will become stronger with the development of DeFi ecosystem, NFTs, etc.

While Protocol DAO is on the rise (early stage), Shared-base DAO has also started the first development steps, especially for-profit DAO. With the appearance of: 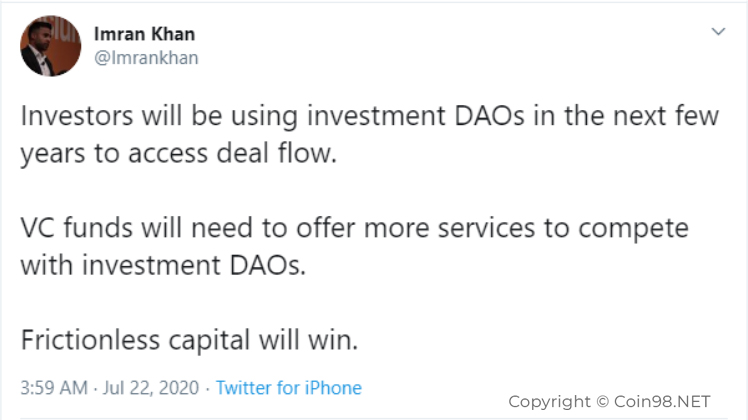 As mentioned before, investment in crypto will gradually be re-formed, and investors will more hardly access to attractive deal flows, so it is necessary to invest through 01 VC DAO.

In addition, other for-profit DAOs are also potential, because they are basically similar to normal companies, except that they exist on the blockchain, and their members participating in the operation can receive dividends, equity, etc.

Intructions on how to Farm HAKKA, and things to note - Part 2

Intructions on how to Farm HAKKA, and things to note - Part 1

What is AMM? How does AMM work for Defi?