What is Dash (DASH)? All about DASH coins

Following the series of articles about Coin and Token's Coin98. Today, let's learn about Dash (DASH).

What is Dash (DASH)?

Dash (code: DASH) is a peer to peer cryptocurrency focused on the payment field.

Dash came out after the successful fork of code Bitcoin in 2014. Since then, DASH has been running on their own Blockchain platform.

On January 18, 01, the project “XCoin”Was born after a successful fork of the Bitcoin block chain by developer Evan Duffield.

After just over 1 month of operation, Evan Duffield decided to change the brand of XCoin to DarkCoin.

With its superior anonymity, DarkCoin is quickly used by criminals in darkmarket.

Not wanting the reputation of the project to be adversely affected, DarkCoin was again renamed Dash on March 25, 03, with the meaning of Digital Cash.

What is Dash (DASH) outstanding?

In order to have good decentralization and anonymity, Dash has developed and applied the following 3 elements to their Blockchain.

These three special elements are: Masternodes, PrivateSend and InstantSend.

At the moment, Masternodes is nothing too special. But in 2014, for the cryptocurrency market at the time, Masternodes was something very special.

While miners (PoW) are responsible for creating new blocks for the network. Masternodes (PoS) is responsible for network administration, PrivateSend and InstantSend features.

To avoid the possibility of Sybil Attacks, Dash requires users to have a minimum of 1000 DASH to become a Masternode in the Dash network.

When you become a Masternode, you will have the right to 45% of the block reward. At the same time, the Masternode will have voting rights and suggestions on important issues affecting the network.

Dash's PrivateSend has the ability to mix coins (coin-mixing) based on CoinJoin. Aims to make your money lose its true origin.

Its mechanism of action is quite simple as follows:

When you want to hide the origin of your money, you can send requests to the masternodes via Dash Wallet. At this time, Masternodes receives requests with the same volume from at least 3 people.

After that, Masternodes will mix the input of one wallet into the output of another wallet (the nature of the money in those 3 wallets remains unchanged). 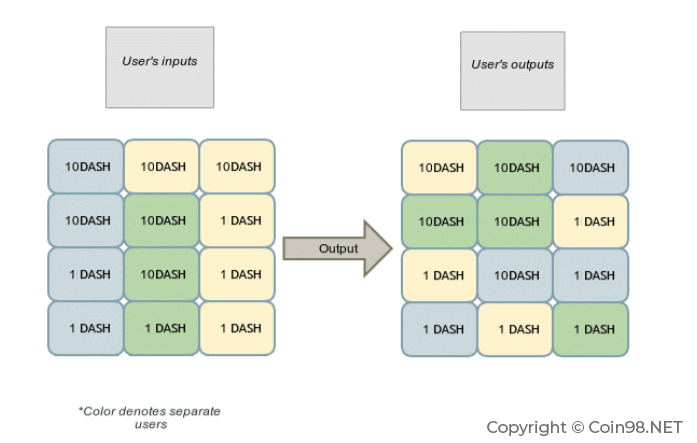 Each time mixing coins like that, Dash stipulates a maximum of only 1000 DASH per wallet.

Unlike Bitcoin, the transaction speed is quite slow. Dash has improved that through the InstantSend function to send transactions almost instantly, while maintaining anonymity. 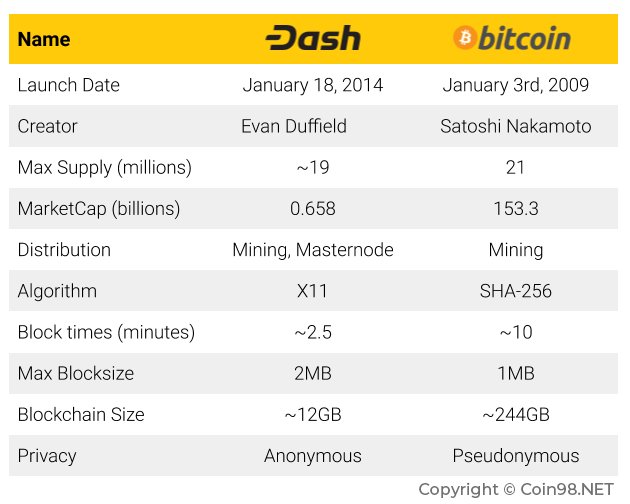 Additionally, the biggest difference between Dash and Bitcoin is the anonymity. Dash's anonymity is more advanced than Bitcoin.

Combining both of the above, you can see Dash achieving anonymity in transactions with high speed.

Purpose of use for Dash (DASH)

Because DASH is run on its own Blockchain, it will have several uses in the network such as:

Sure! DASH will be used to pay for network transaction fees. Because Dash has many types of transactions, the fee will be charged differently.

You can refer to the detailed transaction fee for each type in the image below.

DASH is used as a block reward for both miners and masternodes in the network.

With the reward ratio divided as follows:

Block rewards will decrease by about 7% per year.

To be able to participate in voting on network management issues. You need to become Masternodes and the minimum fee is 1000 DASH.

In addition to its use in the network, DASH is also used to pay like normal currencies.

After more than 5 years of development, more than 4800 Merchants accept payment by DASH.

As I mentioned, you can exploit DASH with CPU, GPU, ASIC miners.

Or become Masternodes in Dash's network. The current block reward of 1,55 DASH for each block will be split equally between Miners and Masternodes at a rate of 45%.

About how to set up DASH digging by excavators, you can refer to the detailed instructions here: https://docs.dash.org/en/stable/mining/index.html

And this is the guide for you to become Masternode of Dash.

Currently, DASH is supported to store on different types of wallets such as:

In addition, you can store DASH on exchanges REPUTATION listed DASH dong.

After 5 years of operation, DASH has been listed by more than 53 large and small exchanges.

The average trading volume over the past 30 days reached more than $ 228 million, showing that DASH's liquidity is very good and stable.

In particular, DASH is the most traded trading on Binance floor.

Maybe you are interested in: What is Binance? A comprehensive handbook on Binance AZ Floor

The future of Dash (DASH)

The purpose when you predict the future of DASH is actually your main purpose whether DASH will increase or decrease in the future, right?

So when will the value of DASH increase?

As you can see, the value of DASH will increase as DASH traffic decreases and demand for DASH increases.

For that to happen, the popularity of DASH must be large (increasing), which in turn will lead to an increase in the number of DASH service providers. At this time, the number of transactions is greater so the masternode will have a better revenue.

This leads to an increase in the number of Masternodes. Meanwhile, the number of DASH in the market will decrease because it takes 1000 DASH to operate the masternode.

OK, got it So we have a case that makes the DASH value increase. Now, let's go to see if the figures say that this case could happen?

Since the beginning of 2019, the number of Merchants accepting DASH payments has decreased by 20% since reaching the peak of 5000. 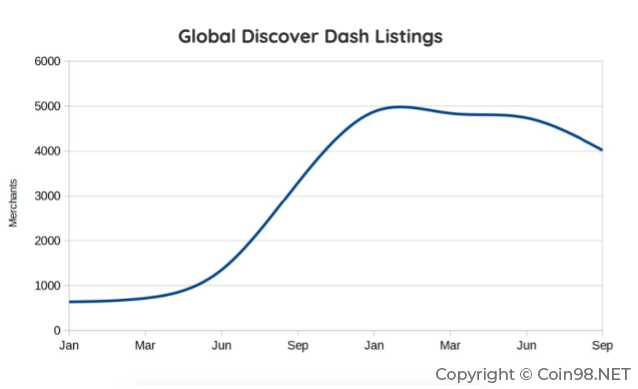 About the amount of Transfers 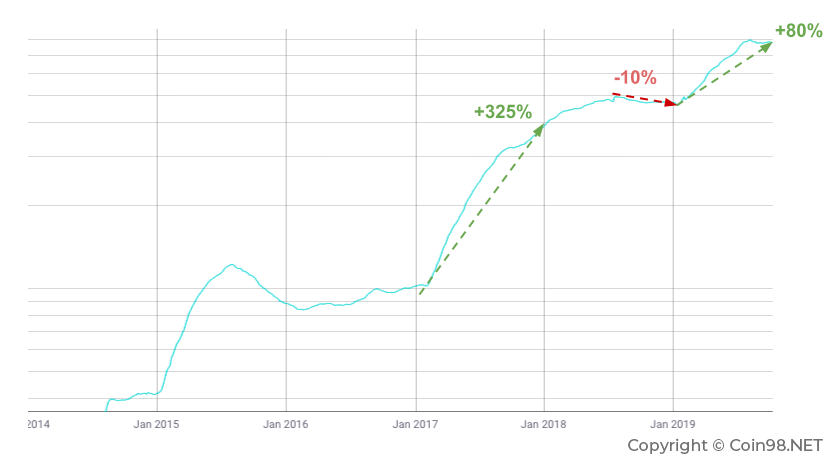 From the beginning of 2019, you can see that the amount of DASH transfers starts to increase by more than 80%.

About the price of DASH

While the number of Merchants decreased, the number of transfers increased. This can be said that Dash's usage level is getting better.

Do you think, is this the true value of DASH or not?

Should I invest in Dash (DASH)?

I am sure that after reading this, you have also captured 99% of the basic and most necessary information about DASH.

Hopefully, from the information provided in the article, you can make your own judgment of opportunities and risks before making a decision to invest in DASH.

Coin98 will continue to monitor and update the latest information about the Dash project.

Disclaimer: The article is intended to provide information about DASH and is not considered investment advice. Invest Cryptocurrency is a form of risky investment, you only participate with capital that can be lost.

I believe that after reading this, you have grasped quite enough necessary information about DASH.

If you see the information by yourself and the team Coin98 The offer is helpful. Do not forget to share this article with other brothers to read it!

Hello and see you again in the upcoming article!

What is Tellor (TRB)? Complete set of virtual currencies TRB

What is serum (SRM)? Full focus on the virtual currency SRM

What is Defiex floor? Instruction to register, use and receive $ 60 from the Defiex platform

What is ProEx? Instructions to use the trading features of ProEx

What is Compound (COMP)? Overview of virtual currency COMP

The article is of interest