Recently, tokens in the Polkadot ecosystem are very interested in the community. Some prominent projects such as Kusama (KSM), ChainX (PCX), Ocean Protocol (OCEAN) ...

In this article, Coin98 team will work with you to learn and analyze the Edgeware (EDG) project - one of the most traded projects on the MXC.

According to the definition of team dev:

Edgeware is a smart contract platform with high performance, self-upgrading WASM within the Polkadot ecosystem.

Note: WASM (WebAssembly) is a technology in the field of Web application development.

According to the definition of Coin98:

Simply put, Edgeware is a blockchain project that allows coders to build Dapps, Protocols, DAOs ... on the Edgeware platform.

As such Edgeware is similar to other cross-platform blockchain projects such as: TomoChain, Fantom, IconX ... or big names like Ethereum, Tron, NEO, EOS.

In the section below, I will talk in more detail the outstanding features of this project.

How does Edgeware work?

Users have the right to vote, authorize, and fund technology improvements and upgrades through the DAO, the cryptographic voting system, the economic mechanism ...

Users in the Edgeware network will have certain rights through governance mechanisms and unique token distribution mechanism Lookdrop (understandably, this is staking ETH that creates EDG coin).

The users participating in the Lookdrop will have a say in the network's future, and their decisions will affect the network's upgrade.

In return, the user will receive rewards for their contributions in the network.

What is special about Edgeware?

As introduced by Edgeware, they have the following outstanding features:

The first Smart Contract on Polkadot

After Polkadot In operation, Edgeware is the fastest and simplest bridge for other projects to be deployed on Polkadot.

Maybe you are interested in: What is polkadot (DOT)? All about Cryptocurrency DOT

Edgeware uses the Nominated Proof of Stake (NPoS) protocol to optimize the system. The users in the network have the right to vote, delegate and sponsor each other.

Currently, each block lasts for 5 seconds, ensuring network latency while keeping the speed of processing large volumes of transactions. 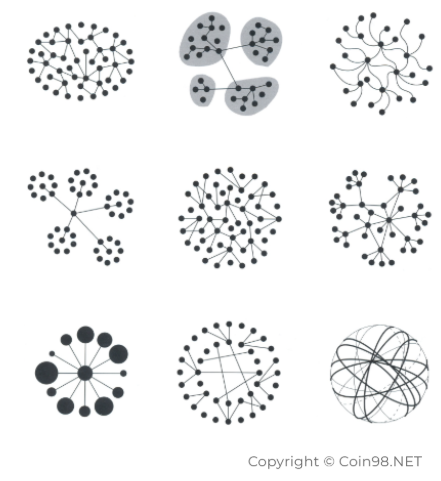 EDG is the official token of the Edgeware infrastructure platform. EDG was launched in the form of Lookdrop.

Edgeware launched on the mainnet in February 02.

With an initial supply of 5 billion tokens, EDG is allocated by the development team into five parts at the following ratio: 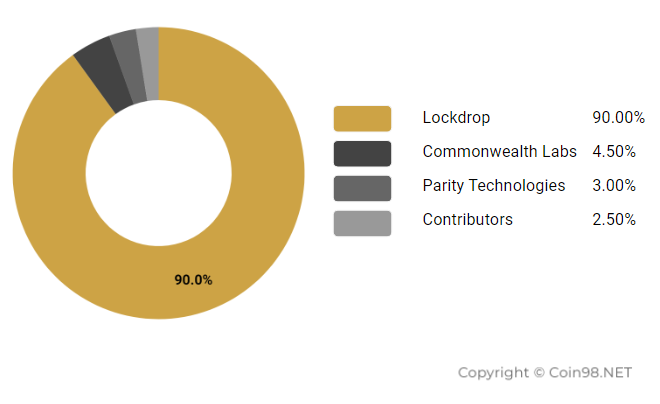 With the above token distribution, it will not bring any outside capital. However, Commonwealth Labs raised $ 2 million from an endorsement.

Below is the project's token unlock time:

Note: Each year there will be billions of EDG tokens born, the current inflation is about 20% / year.

What is Edgeware (EDG) used for?

EDG token is considered as the lifeblood of the Edgeware network, below are some of the applications of EDG:

The reward is currently 158 EDG / block.

EDG will be the means of payment in future applications such as: DAOs, dApp (including DeFi) ...

Edgeware is built on PolkaDOT platform so the EDG token can be stored on the PolkaDOT network. Click here to create EDG storage wallet: https://polkadot.js.org/

Besides, there is a mobile wallet platform that also supports storing EDG tokens, Math Wallet.

The average total trading volume over the past 30 days has been around $ 0.5 million. That shows the liquidity of EDG is quite poor at the moment.

OXT is currently the most traded on 2 exchanges BKEX and BiKi floor.

The Future of Edgeware (EDG)

In the future when Polkadot operates, Edgeware will be the bridge providing infrastructure for projects operating on Polkadot. This leads to an increase in demand for EDG tokens as the EDG token serves as a means of payment in the infrastructure.

EDG is located in the Polkadot ecosystem, whose tokens are very hype. The proof is that from the beginning of the year until now, these tokens have risen sharply.

In the coming time, EDG will have many important news such as supporting DeFi, increasing staking rewards, connecting with Ethereum and Polkadot ... The news will contribute to the price increase of EDG.

Should you invest in Edgeware (EDG)?

I believe that you have also grasped basic and necessary information about EDG copper. I will note some main points for you to make investment decisions.

On July 31st, Edgeware released the roadmap from here until the end of the year. Here are the important information that I gathered from the project:

You can click here to view roadmap details of Edgeware: https://commonwealth.im/edgeware/proposal/discussion/509-edgeware-2020-roadmap-discussion

In the roadmap, the mentioned project will launch Wallet in Q4 / 2020. But did not say details about the product. We will wait and see what the Edgeware Wallet will have outstanding features.

The largest current partner of Edgeware is Polkadot. In the coming time, Edgeware will have many new partners such as Kusama, Ethereum ...

Hopefully my last article has helped you to have a better overview of the Edgeware project as well as the EDG token.

As for you, what do you think about coin after this article? Please share your opinions in the comments or in the Coin98 Finance community.

The crypto market is still very young, risky, but opportunities are not lacking, spending time focusing on research will help us to reduce risks significantly and increase the probability of finding investment deals with high ROI. .