Before going to learn about the Istanbul hard fork as well as updating Ethereum 2.0, let's find out about the hard fork and Ethereum's hard forks.

What is hard fork?

You can simply understand Hard Fork means changing the rules of operation blockchain.

When the blockchain operates at some point, a hard fork will occur and will continue to operate with the new rule. Blocks that use the old rules, after the hard fork happens, will not be accepted by the new blockchain.

Hard Fork is a popular update in blockchain. Lots of cryptocurrencies like Steemit, Litecoin, Bitcoin... use hard forks to update. 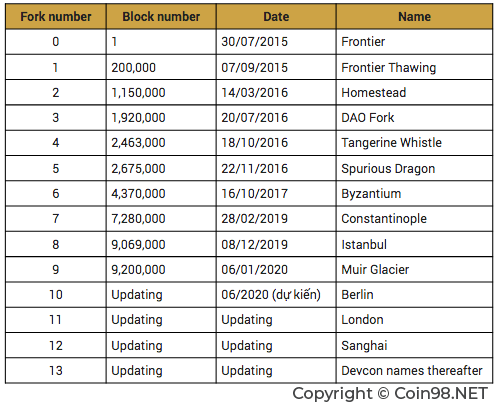 As you can see, the last Istanbul update was Ethereum's 8th hard fork. There have been 7 hard forks before.

Ethereum will not stop here and many more hard forks have been shared by the dev team. Ethereum's next hard fork after the Istanbul hard fork is the Muir Glacier, which is expected to take place on January 06, 01.

The question is, "How many hard forks are left for Ethereum to successfully become Ethereum 2.0?".

This is currently not the official document shared by the dev team, we will talk about Ethereum 2.0 in the following sections.

The Istanbul hard fork is named after Turkey's largest city - Istanbul. The hard fork was successfully held on December 08, 12.

Maybe you are interested in: What is Ethereum? Complete set of Ethereum for beginners

After the successful update of Istanbul, Ethereum has taken Ethereum one step closer to becoming Ethereum 2.0.

Ethereum 2.0 was mentioned by Vitalik Buterin in mid-2016. Ethereum 2.0 is an exchange transition from Ethereum from the mining system. Proof of Work (PoW) through the stock system Proof of Stake (PoS).

The switch to PoS will help Ethereum overcome the old disadvantages of the PoW system: Performance, cost, scalability, network security. 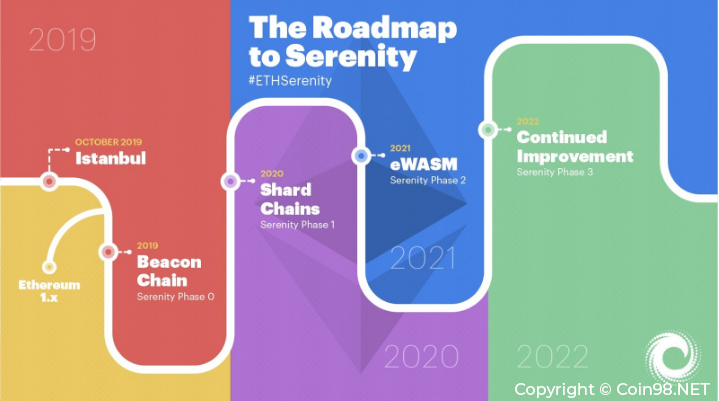 Maybe you are interested in: What is Proof of Work (PoW)? The importance of PoW

The conversion process is divided into 3 small stages:

This is the first phase of the transition from PoW to PoS. At this stage, there will be 2 Ethereum networks running in parallel. A network uses PoW, a network uses PoS.

The network that uses the PoS system will use a new coin called ETH2. You can convert ETH to ETH2 to staking profit. The condition for staking is to have at least 32 ETH.

However, it should be noted at this stage that when you convert ETH to ETH0 for staking, you will not be able to withdraw until the next stages.

This is the stage where the dev team will apply the Sharding solution on the Ethereum network.

It is a solution that divides data into small parts and processes at the same time to help the Ethereum network achieve higher performance.

This is the phase of transferring all applications, data, ETH in the current network to the Ethereum 2.0 network.

Networks that use the PoW system will stop working. And it seems that Ethereum has successfully transitioned to the PoS system.

You can find out more in the documents shared by the dev team: https://github.com/ethereum/wiki/wiki/Sharding-roadmap#phase-3-light-client-state-protocol

In May 05, the Ethereum Foundation announced that it would spend $ 2019 million on Ethereum's strategies in 30. Of which $ 2020 million will be spent on Ethereum 19 development activities.

It can be seen that Ethereum is determined to eliminate all mining mechanism to switch to stake coin. This will be an important event that will change the whole ecosystem of Ethereum.

Refer to the article: What is Proof of Stake (POS)? How to mine POS coin?

According to the dev team's prediction, Ethereum will complete the transition from PoW system to PoS by 2021.

The conversion process will bring a lot of changes. One of the biggest changes is surrounding the economics of Ethereum 2.0.

Problems occurred during the transition to Ethereum 2.0?

Read here to have you wondering if in the process of implementing stages 0, 1, 2 if many people do not support the PoS system and continue to dig on the PoW system, will it be possible? 2 Ethereum systems or not.

To solve the problem on the Ethereum team decided to use a technology called Ice Age during the 9th hard fork - Muir Glacier.

With Ice Age technology will make the mining difficulty increase many times making it difficult for miners to make a profit. And the difficulty of digging will continue to increase until the entire miner does not dig anymore because the more you dig the hole. And it was then that Ethereum moved on to the Ethereum 2.0 network.

Hard Fork Muir Glacier is expected to update on January 06, 01. ETH mining should consider this issue in the near future.

In addition, the dev team proposes ProgPOW to fight ASIC miners. This is the problem that the ETH mining brothers are very worried about.

However, up to now there is no official information that ProgPOW technology will be updated in the next hard fork. I will update when the latest announcement from the Ethereum team.

The impact of Hard Fork on the price of ETH

As you all know, history shows that hard forks have a significant impact on cryptocurrency pricing. Typically hard forks Bitcoin Cash famously, Bitcoin holders are affected by the same number of coins reduced.

For example, if you hold 100 BTC, then the time the Bitcoin Cash hard fork ends, you own 100 BCH.

Below is the effect of hard forks on the price of ETH. 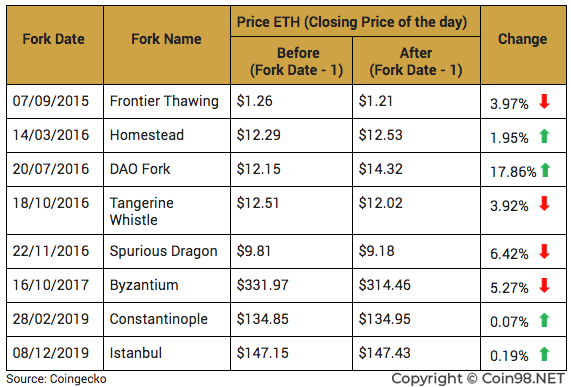 As you can see, the majority of hard forks do not significantly affect the price of ETH. Except for the DAO Fork event that led to the Ethereum community network being split into two coins: ETH and ETC. This has led ETH to a sharp increase in prices.

During the recent Istanbul hard fork, despite a successful update that brought Ethereum closer to the transition to Ethereum 2.0, it seems that ETH's price has not been affected. This makes some speculative users regret.

However, you may be interested in the 9th Muir Glacier hard fork scheduled to take place on January 06, 01. This is an important hard fork for those who are mining ETH.

The price of ETH may be significantly affected by this hard fork. With the current market capitalization of $ 13.96 billion and the supply of 108.96 million can boost the price of ETH.

Above are the share as well as my personal views. You need to consider before making an investment decision.

Hopefully this article has helped you have an overview of the hard fork of Ethereum, Ethereum 2.0 and its effects on the price of ETH.

What do you think after reading this article? Please share your opinion in the comment section below. I as well as the Coin98 team will answer for you as soon as possible.

Hello and see you in the following article!

Guide to registration for crypto investment course 101 on KTCity

What is MLM Coin? Should you invest in MLM coins?