Serial series of articles about Coin and Token of Coin98. Today, let's learn about Origin Protocol (OGN), one of the coins that Mr. Le Thanh has praised many times on Coin98 Trading Desk!

In this article, we will learn about 3 main parts:

What is Origin Protocol (OGN)?

According to Coin98 definition:

Origin Protocol is a platform that allows the creation of peer-to-peer marketplaces of parties that can connect and trade goods and services on these markets. Developers can create their own applications on the Origin platform.

Some of the common problems that Origin Protocol (OGN) poses are:

Uneven distribution of value between parties within the Marketplace

The value received by intermediaries is not commensurate with the value they bring.

In Origin Protocol's White Paper they argue that online travel companies such as booking.com and Expedia charge affiliate hotels up to 15-30% of the transaction value. Other names can be mentioned such as AirBNB, Uber, Fiverr ...

The intermediaries control a huge store of user data. These corporations often use this data for their own benefit.

Moreover, such focus often makes them a bad target for Hackers and we do not lack the most recent hacked user information case, Hacked Twitter.

Lack of motivation for innovation

In some industries, there exist many monopolies, when in such positions many of them operate with the main purpose of "maintaining" their position. These companies lack motivation and healthy competition to grow and innovate.

A good example of this is Craigslist. It is the first mainstream goods and services marketplace on the Internet, which has grown for more than 20 years despite an outdated user experience that doesn't even offer a secure and easy way to pay for transactions. Even so, many of its competitors failed because Craigslist had the dominant advantage of being "the first in the industry".

What is Origin Protocol (OGN) solution?

Origin's solution is a Platform that allows the creation of Marketplace with the following highlights: 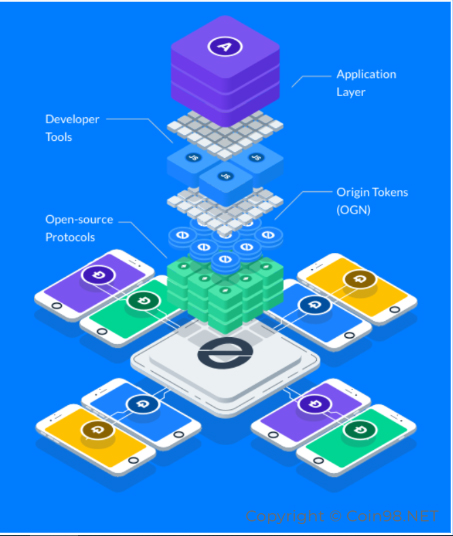 In addition, Origin also provides other resources for developers to develop the ecosystem of the typical platform such as: Open source protocols, developer libraries, tools to create markets.

What is OGN Token?

OGN is the Native Token of the Origin ecosystem and is used for the following purposes:

Some basic information about OGN Token 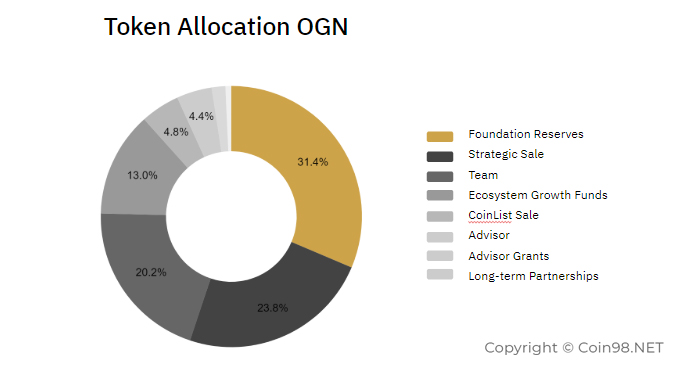 OGN Token has a Token Sale 3 times, the time and price for you can refer to the table above.

The OGN token will be partially unlocked monthly. According to project information, the total circulation supply will increase by 5-7% every 3 months, each item will be unlocked a little.

To consider the schedule of unlocking OGN's longer-term tokens, you can refer to click here.

How to earn OGN token?

As in the OGN Token section, you can join the Origin Protocol Dapp ecosystem to buy and sell products on it to receive OGN.

There is another simpler way that you can buy OGN on exchanges that allow to trade OGN like Binance, MCX, Houbi ... the trading floor OGN you can refer here.

The OGN copper exchanges mentioned above, Coin98 have all detailed articles. You can search and refer to more.

The OGN copper trading exchanges that you are interested in

OGN is an ERC-20 token so you can store it on Ethereum wallets that support this standard like:

In addition, you can store on the PRESTIGE exchanges that have supported listing of OGN.

Refer to the article: Instructions for using USDT Coin98 Wallet

According to the data of CoinGecko, OGN tokens have been traded on exchanges such as Binance, Houbi, MCX Uniswap V2, kyber Network ... with total trading volume in the past 24 hours reaching 6 million USD.

Maybe you are interested in: What is Binance? How to use Binance Exchange?

The future of OGN Token

Origin's market is the Sharing Economy, a market of hundreds of billions of dollars with many traditional companies dominating and making money. Origin project needs more than just a brilliant technology to compete with these giants.

Choosing a niche in it is a right direction that both saves resources and is easier to focus.

Origin Protocol chose the E-commerce market - one of the fastest growing industries in the blockchain industry over the next few years. 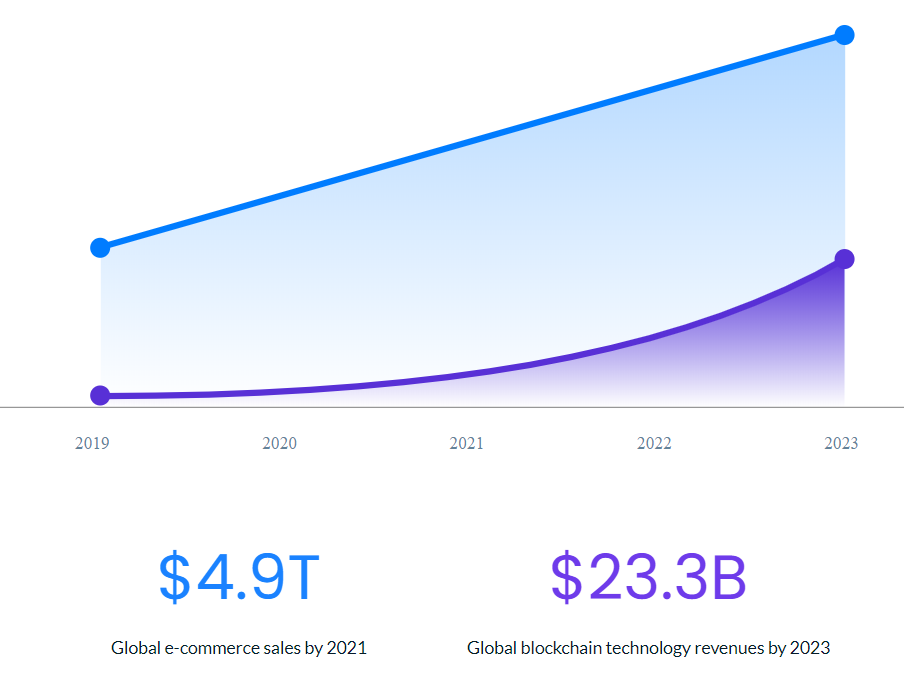 Looking back at OGN Token, this is the Native Token of the project. In the long term the price of the OGN Token will depend on the actual application of the Origin Platforms technology and the number of Users and Developers that they will be able to attract.

The larger the ecosystem, the more valuable the project, in the long run the price will go with value.

Should invest in OGN Token

This part will be my subjective view on the short-term (6-12 months) future of OGN Token.

The idea of ​​creating Market Places on Ethereum is not new. This is a long-term idea and takes a lot of resources to be successful but the team has stepped out of the Concept phase and have a finished product initially. This is one of the pluses for the project.

You can refer to how to install and use Dshop in the video below:

Talking about personnel, this is a bright spot of the project, Core team many people used to hold important positions in big companies such as Google, Youtube, Paypal, Dropbox.

One of the highlights I noticed is Yu Pan - R&D Engineer at Origin Protocol, this guy is Co-Founder of Paypal, one of the first employees of Youtube, CTO of 1i ... and now he is an R&D Engineer. at Origin from 8.

About the Team of the project you can read more here.

The backed line of the OGN project is quite quality.

In the 3 rounds of fundraising, a fair number of up to nearly 40m is also raised, which is quite large compared to the common ground of Crypto projects today.

VCs segment has a few prominent names such as Pantera Capital, Consensus Capital.

The velocity of money is a measure of the number of times money moves from one entity to another in a given period of time.

The velocity of money is an important metric to measure the speed at which money is being used to buy goods and services. It is used to help economists and investors evaluate the health of an economy.

In Crypto the velocity of a cryptocurrency can be calculated by:

The higher the velocity means that the Crypto tends to be exchanged rather than stored.

Based on the design used by OGN, we can see that Rewards, Commissions / Advertising, Payments designs increase the circulation speed of OGN Token (short-term Sell Demand).

In contrast, designs such as Staking and Governance increase the demand for buying and storing OGN Token (Buy Demand).

At the time of writing this article, details of model Staking and governance of OGN has not been Released yet so I cannot assess whether these Buy demand is strong or not?

As for Token Release Schedule, it is clear that this is a significant Sell Demand for OGN tokens because every month there are unlocked tokens, this number falls to 5-7% of the Total Supply every 3 months.

In the remaining 2 quarters, the project will Released some important features as follows:

The point I really like about the Origin project is the way they try to be transparent about OGN Token through the token details page. On this page there will be quick Stats on OGN price, capitalization, Circulating Supply, total supply, Token Unlock Schedule, Modeled with actual token release schedule, everything is clear and intuitive.

For me, in a Researcher corner, the fact that a project tries to bring clear and unambiguous information about the Token is very remarkable for their efforts and efforts to provide information to Token Holders.

The second point is how the Team tries to reduce the circulating supply by various means:

For more details, please refer to the information you have just shared here.

Hopefully, my last article has helped you to have a better overview of the Origin Protocol project as well as the OGN coin.

As for you, what do you think about coin after this article? Please share your thoughts in the comments or in the Group telegram.

See you in the following articles!

The crypto market is still very young, risky, but opportunities are not lacking, spending time focusing on research will help us to reduce risks significantly and increase the probability of finding investment deals with high ROI. .