What is Ripple and XRP? All about Ripple & XRP (details)

It is true that 89% of cryptocurrency market participants answered Ripple as XRP and vice versa.

But the truth is not so?

In today's article, let's find out what is the truth about Ripple, XRP!

Founded in 2012, Ripple is one of the first generation companies in the industry Blockchain.

In 2011, Jed McCable (Former founder of Mt.Gox) decided to develop his own cryptocurrency project. In May 05, Jed and Arthur Britto and David Schwartz developed a ledger called XRP Ledger.

In September 09, after persuading Fugger to give full control of Ripplepay, Jed McCaleb, Chris Larsen and Arthur Britto founded OpenCoin.

Between April and May 04, OpenCoin received $ 05 million from major investment funds such as Google Ventures, Andreessen Horowitz, Pantera Capital, Digital Currency Group ... in the Seed Round. 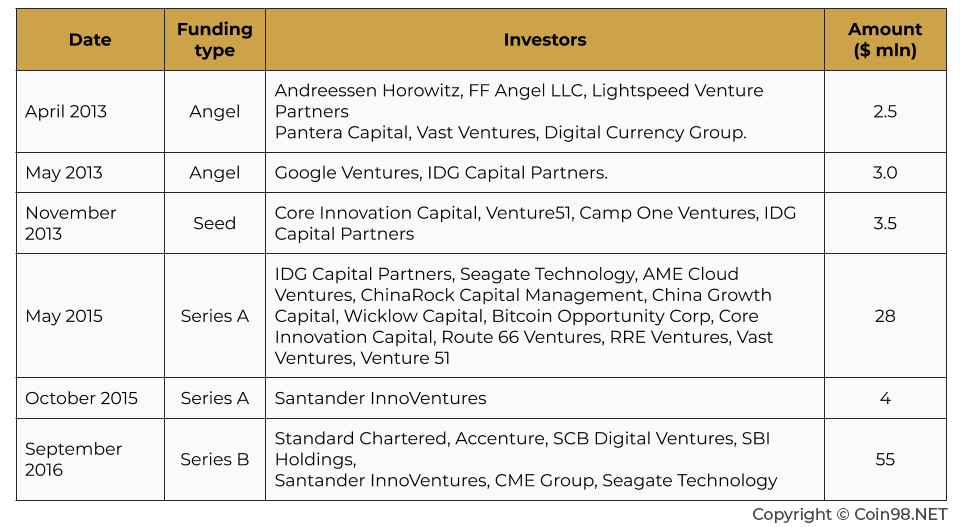 In early 2015, Ripple signed a cooperation with Western Union. A few months later, Ripple was fined $ 700 by FinCEN for violating banking security laws by selling XRP without the agency's permission.

However, this is also an interesting part when FinCEN defaults to XRP as a currency, not a security token.

In October 10, Ripple Labs changed its brand name to Ripple but the company is still named Ripple Labs Inc.

In 2017, Ripple continues to grow with the signing of many banks using their RippleNet products.

Also in 2017, Ripple hosted the first annual SwellbyRipple event. As of 2019, this event has been held for the 3rd time.

The trend of cross-border payment tends to grow significantly. However, the current payment infrastructure is facing problems such as high transaction fees, long transfer times, and difficult to monitor.

RippleNet is a network that connects banks and financial institutions using the solution provided by Ripple. Includes: xCurrent, xRapid & xVia.

xCurrent is built on a protocol developed by Ripple called Interledger (ITL) * and not XRP Ledger.

This means that customers using this Ripple solution will not use the XRP token.

* Interledger is an open protocol that allows payment via different ledgers (including Blockchain). 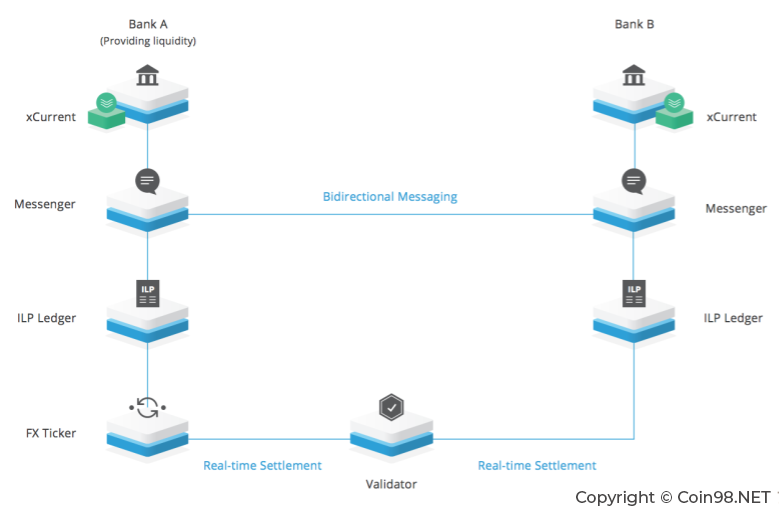 As a solution to provide liquidity on demand On-Demand Liquidity (ODL) for banks using XRP as an intermediary currency between many different fiat currencies.

Because this is the only solution using Ripple's XRP and is also the strongest card at the moment of Ripple. I will explain to you how xRapid works.

Suppose, Bank A in Mexico and Bank B in India both use Ripple's xRapid solution and Bank A wants to make a conversion of USD 10,000 to the INR (rupee) at the Indian bank.

The procedure is as follows:

All of this process only takes a few minutes much faster if using the current payment system (3-5 days).

xVia is a standardized interface based on API. It allows financial institutions and businesses to make payments through other members of the RippleNet network. 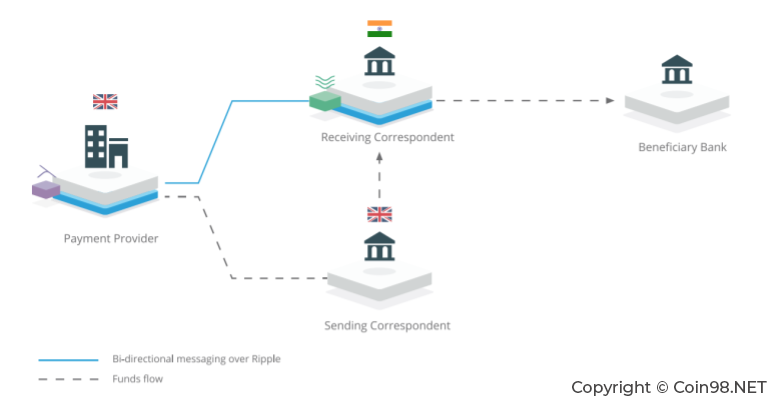 XRP Ledger is a decentralized ledger based on a network of peer servers, created in 2011 by Jed McCaleb, Arthur Britto and David Schwartz.

XRP is the official token operating in XRP Ledger. With 100 billion tokens pre-mined in 2011.

In 2012, all three founders of XRP Ledger decided to give OpenCoin 3% of the XRP.

With a maximum total supply of up to 100 billion tokens, XRP holds 80% of the annual Ripple Labs and the remaining 20% ​​belongs to founders. As follows:

With 80% of the total XRP tokens, Ripple has the sole discretion to sell or distribute XRP for free for the purpose of developing and promoting RippleNet products.

According to data from BitMEX Research, between January 01 and July 2013, Ripple sold about 07 billion XRP. In which, 2015 billion XRP is sold to partners, the remaining 16.5 billion XRP is used to pay for the company's operating expenses. 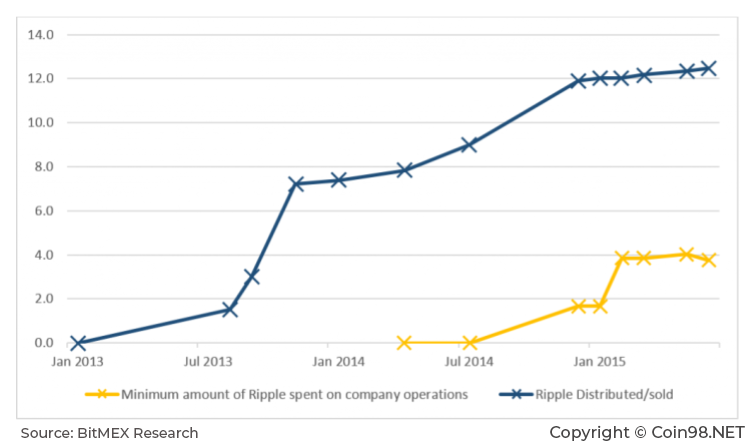 Ripple created an Escrow fund to pledge to support RippleNet's operations at 55% (i.e. 55 billion XRP) by the end of 2017.

With 1 billion XRP unlocked each month to pay the operating costs of RippleNet. Unused funds will be returned to the Escrow fund at the end of the month and awaiting the next disbursement. 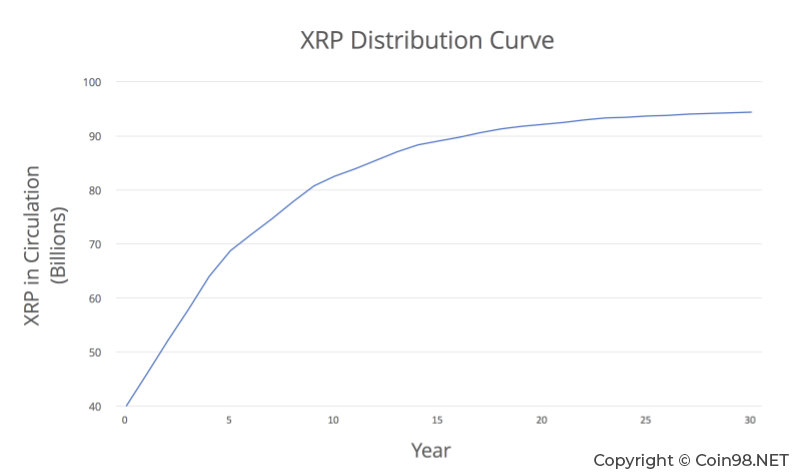 The remaining 20% ​​of XRP belongs to 3 founders of XRP Ledger, including Chris Larsen, Jed McCaleb and Arthur Britto.

In 2014, Jed McCaleb left Ripple to form Stellar (XLM), so Jed's XRP will be disbursed according to the following agreement:

However, the deal was revised in 2016 after Ripple suspected Jed had violated the original terms.

Under the new agreement in 2016, Jed must donate 2 billion XRP to charity and the remaining JED 5.3 billion XRP is held by Ripple.

This 7.3 billion XRP will be disbursed each year by Ripple as follows:

According to data from the Ripple homepage, as of October 10, the total supply of XRP is shown as the chart below.

Purpose of use of XRP

XRP has several uses as follows:

XRP is used as an intermediary currency in Ripple's On-Demand Liquidity (ODL) solution.

To be able to transfer money, users need to hold in a wallet at least 20 XRP. This is a provision to limit Ripple's spam status.

XRP is used to pay transaction fees within the XRP Ledger network. The current minimum fee is 0.00001 XRP (~ 10 drops).

Validators in XRP Ledger will not receive transaction fees like other blockchains, but this transaction fee will be burned, removed from the supply of XRP.

However, such a small fee will not cause deflation effect for XRP.

How to dig XRP?

XRP Ledger uses the RPCA algorithm to have consensus within the network. So you can't dig as well as Staking XRP.

Ripple also does not perform any XRP airdrop campaign at the moment as Stellar is doing.

Therefore, if you want to own XRP, you can only go to the exchange REPUTATION to buy XRP only.

Maybe you are interested in: What is stellar (XLM)? Complete focus on the virtual currency XLM

Currently, XRP is supported by many wallets. You can choose some wallets below to store XRP:

In addition, you can store XRP on exchanges REPUTATION To facilitate the Trade.

After 7 years of establishment and development, XRP has been supported to buy and sell on 48 large and small exchanges.

With a total average volume of transactions over the past 30 days reached more than 1.8 billion, shown liquidity XRP is very good at the moment.

In particular, XRP is being traded the most on Upbit.

The future of XRP

Ripple enters the payment market targeting bank customers so it will compete with the traditional payment system with over 45 years of age - SWIFT.

Currently, the number of SWIFT transactions per day is more than 34 million transactions with a total value of over 5 trillion USD.

Now, let's see a little comparison between Ripple and SWIFT. 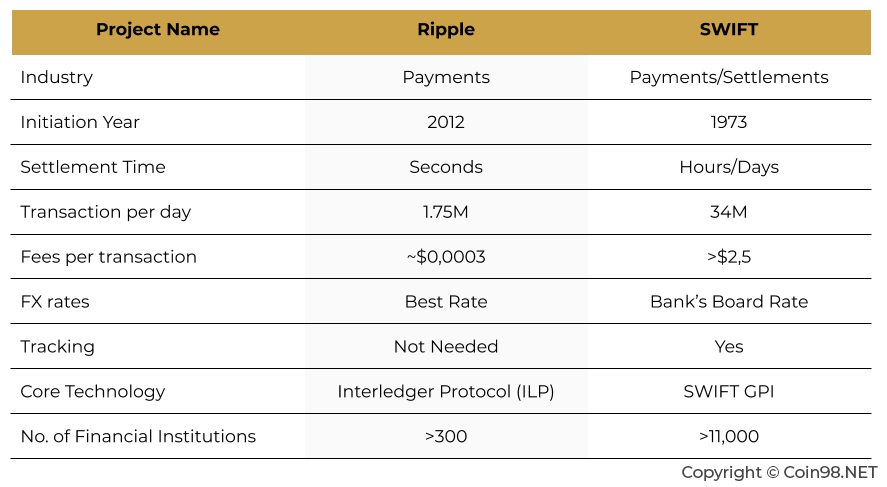 First, let's see about the number of active wallets on XRP Ledger's network.

The number of active XRP wallets increased to 57.55 thousand in the beginning of July 07, equivalent to + 2019%. After that, it fell back to a stable level compared to the beginning of the year.

Next is the number of transactions across the network of XRP Ledger.

You can see the transaction volume of XRP Ledger has increased sharply to 1.74 million transactions per day, equivalent to 228.4% compared to the beginning of the year.

Only in mid-October, the number of transactions has increased by over 10%. This is probably the effect due to Ripple's On-Demand Liquidity solution being commercialized in October 139.5.

At launch, ODL has only about 10 customers. Up to now this number has reached 24.

In particular, MoneyGram is considered the partner with the most transactions when 10% of their transactions are completed via Ripple's Ripple.

As I mentioned in the Allocation section, Ripple will be able to open 1 billion XRP per month and have full rights to use this number.

So in the section below, my brothers and I see in 2019, how much XRP has sold and how much is it worth?

This is also a major source of selling makes XRP difficult to raise prices, so you should pay attention to this point. 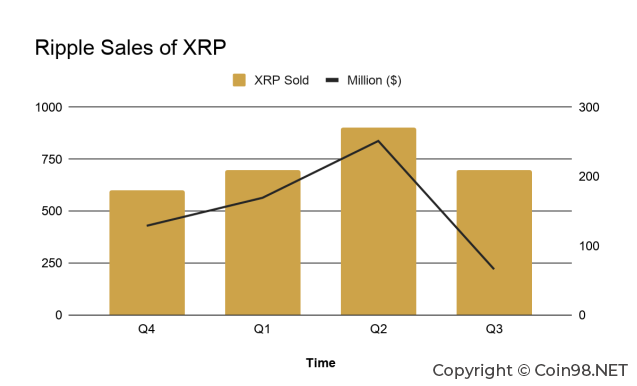 Although the amount of XRP sold has been greatly reduced, the price of XRP has continued to fall by more than 52.2% since the beginning of Q3.

Should I invest in XRP?

I'm sure that after reading this, you have also captured 99% of the most basic and necessary information about XRP in particular and Ripple in general.

Hope from the information provided in the article. You can make your own judgment of opportunities and risks before making a decision to invest in XRP.

Coin98 will continue to monitor and update the latest information about this project.

Disclaimer: This article is for XRP information only and does not constitute investment advice. Invest Cryptocurrency is a form of risky investment, you only participate with capital that can be lost.

Here are some frequently asked questions about Ripple and XRP.

Are Ripple & XRP the same?

Is not! Ripple is the developer of XRP Ledger. And XRP is a cryptocurrency running in XRP Ledger.

Where to create an XRP wallet?

Ripple does not release official XRP storage wallets. You can store XRP in the wallets you mentioned above.

Where to buy XRP?

Currently, in Vietnam you can buy XRP through the exchange Remitano or Aliniex. I also have detailed instructions on how to buy XRP here, you can refer.

How many financial institutions and banks have used RippleNet?

According to the current figures provided by Ripple, more than 300 customers use RippleNet.

Ripple & XRP is the name that brings a lot of uplifting emotions to many brothers in the electricity market since the end of 2017. But it is also a pain for you to climb the peak with a divisive 12 divisors.

However, it is also undeniable that Ripple's efforts have been trying to create and make XRP valuable. Especially through their On-Demand Liquidity (ODL) solution.

Do you think ODL will make Ripple's game-changer for XRP? Please comment your opinion at the end of this article.

And if you see the information by yourself and the team Coin98 The offer is helpful. Do not forget to share this article with other brothers to read it.