What is Storm (STORM)? All about STORM virtual currency

In today's article, I will introduce to you about cryptocurrency Storm (STORM). Follow me the article.

Here, people can earn STORM tokens easily from quests and use it to shop for any product through the services provided by Storm Market.

Storm Market was founded and developed by the company StormX in 2017.

What problem does Storm (STORM) solve?

Storm Market focuses on the free industry around rewarding missions.

Currently, big companies in this industry such as Fiverr, TaskRabbit, Upwork, MTurk have networks spread globally and they are gradually destroying the free industry.

Freelancers are forced to lose 40% of their bonuses to these platforms with restrictive withdrawal policies and transaction fees.

How does Storm (STORM) solve the problem?

The Storm development team solves this problem by applying a smart contract to create a separate market - Storm Market.

These tasks play an important role in the ecosystem. The tasks performed by the smart contract are the agreement between the task creator (Maker) and the implementer (Player). The contract will include job details and payment terms.

After users successfully perform the tasks, they will receive STORM tokens and can be exchanged for cash directly on the exchanges.

Storm Market's goal is to reduce the costs of the posted tasks and also to ensure that those who complete the task receive their fair reward. 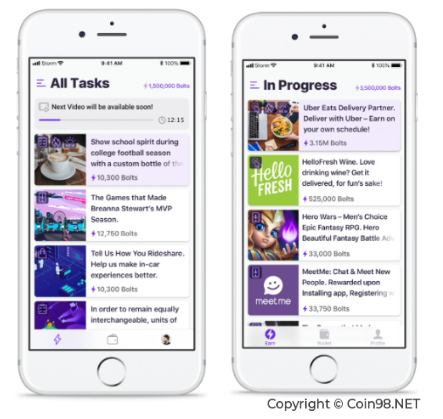 What is Storm (STORM)?

STORM is the official token of the Storm Market platform - a decentralized market.

It is built on the foundation of Ethereum according to the ERC-20 standard. Was released to the market on 11/07/2017 through calling for capital ICO.

Maybe you are interested in: What is an ICO? A Comprehensive Guide to ICO Investment from AZ

With a fixed supply of 10 billion tokens, STORM is distributed in three parts by the development team with the following ratio:

The project for issuing ICOs takes place from July 11 to August 07, 12.

The project sold out tokens and collected more than $ 32 million at the time.

Information about unlocking tokens is not mentioned in the project's whitepaper nor Storm's community channels.

At the moment, more than 76% of tokens are already on the market.

What is Storm (STORM) used for?

The STORM token is the lifeblood of the Storm Market platform with three main uses:

The STORM token is used as a reward for performing tasks on Storm Play, Storm Shop and Storm Gigs.

STORM is used to pay for purchases of products on the Storm Shop. Users can also use STORM tokens to purchase their favorite products from vendors.

Vendors and companies will receive revenue from the sale of their products on Storm Shop.

Users must pay a transaction fee on the Storm Market platform.

It can be seen that transaction fees have decreased a lot compared to traditional companies today (20 - 40%).

How to earn STORM token?

As I mentioned above, you can earn STORM tokens by participating in the Storm Market and performing tasks on it and receiving rewards with STORM.

To participate in Storm Market, you need to download the Storm Play application already available on AppStore and Google Play.

In addition, you can earn STORM tokens by buying on Storm-listed exchanges (STORM).

Storm (STORM) has developed the Storm Play application which allows users to store STORM tokens as well as participate in Storm Market.

Besides, STORM is an ERC-20 token so you can store it on wallets that support this standard of Ethereum such as:

Also, you can store on these PRESTIGE trading platform supported STORM listing.

Maybe you are interested in: Top 6 prestigious Bitcoin and Crypto exchanges in the world

After more than 2 years of launch, the STORM token is currently ranked at the top 305 Coinmarketcap.

The average total trading volume in the past 30 days reached about 1.4 million. That has to show creditial STORM's is quite good at the moment.

STOM is currently traded the most on two major exchanges, Upbit and Binance.

The potential of free industrial market in the future will develop very strong. Especially in this industrial revolution 4.0, the demand for freelancers is increasing.

In particular, STORM will compete with traditional giants such as Fiverr, TaskRabbit, Upwork, MTurk and some other blockchain projects such as DATA, BAT, ADex ...

Besides the potential and fierce competition, what do you consider about the perspective of STORM so far?

Should we invest in Storm (STORM)?

I believe that you have also learned the basic and necessary information about Storm (STORM) after reading this paragraph.

Up to now, Storm (STORM) has completed the roadmap. However, there is still no information about Storm's upcoming direction.

You should be wary of projects that have completed the roadmap without giving specific directions.

Hopefully my last post has helped you to have a better overview of the Storm project as well as the STORM token.

And what do you think of the coin after this article? Please share your opinion in the comment section or inside Coin98 Finance.

Hello and see you again in the following article.

What is BetProtocol (BEPRO)? Complete set of virtual currency BEPRO