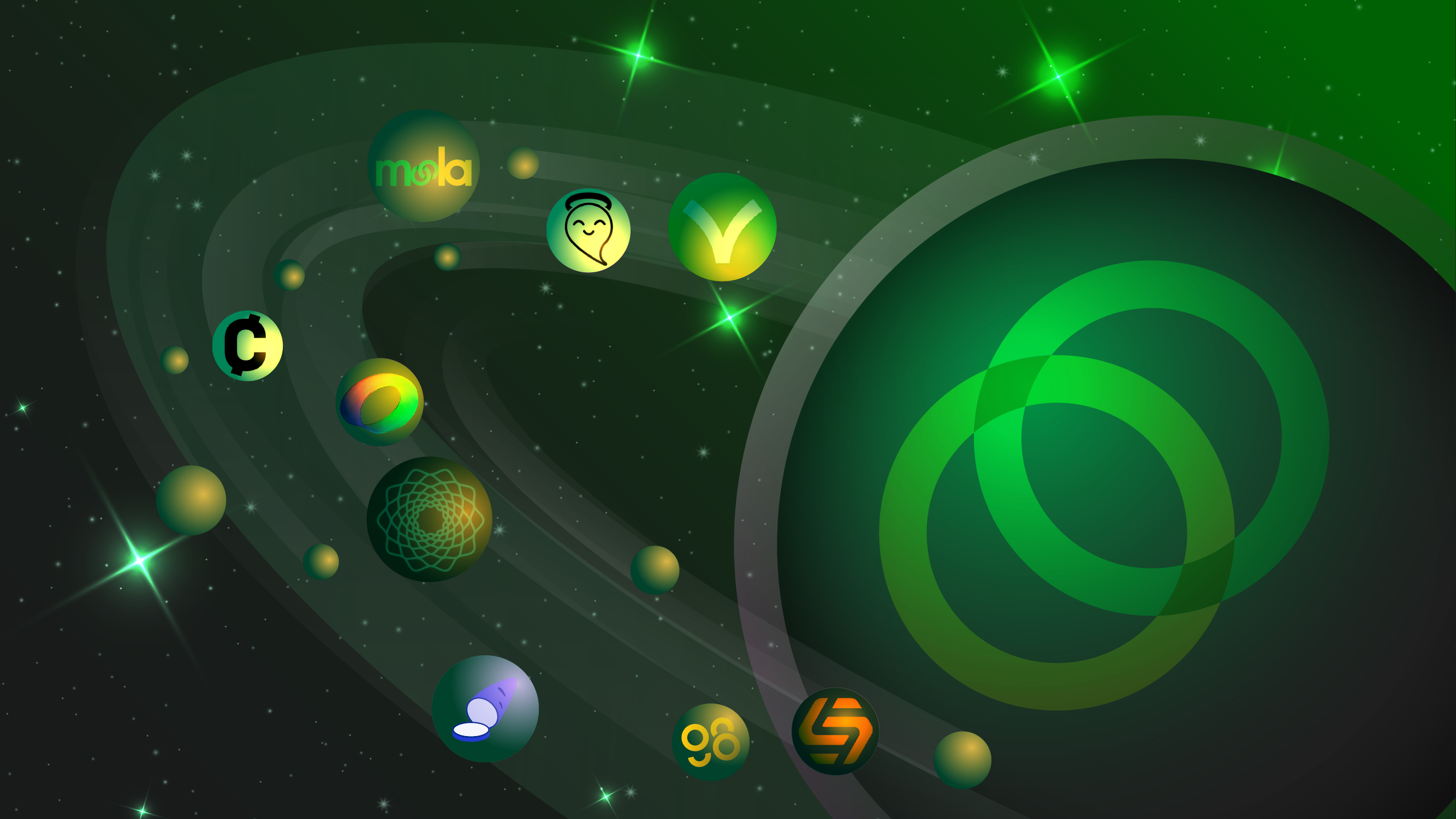 This article will delve into the Celo Ecosystem in depth to help you understand the vision, ecosystem, and predictions for this layer 1 chain.

Celo has chosen to be a blockchain that is best suited to mobile devices out of a slew of blockchains with different goals and objectives. Since mobile phone users are a primary focus of Celo's business strategy then, how does Celo plan to reach them?

Celo is a mobile, carbon-neutral blockchain that makes decentralized financial (DeFi) tools and services accessible to anyone with a mobile phone – bringing the benefits of DeFi to the users of the 6 billion smartphones in circulation.

Mobile-friendly: Mobile phone number mapping to account addresses for a seamless user experience on platform-native dApps such as impactMarket or Valora.

Open: Celo uses a Proof-of-Stake (PoS) consensus protocol. With its interoperability, Celo will be able to facilitate transactions between other smart contract enabled layer 1 blockchains such as Ethereum, Cosmos, Solana, Near, and others thanks to the Optics, a new gas-efficient bridging standard that connects Celo with Ethereum.

Ultra-accessible with Ultralight Mobile Client: The ultralight client is a zk-SNARK-based system that enables mobile and resource-constrained Celo network nodes to sync to the Celo blockchain faster and with less data.

As a result of the $100M incentive programme announced in Q3 2021, Celo used to attract a significant amount of cash into the ecosystem; however, the money at that time was purely speculative because the Celo ecosystem was not mature enough to sustain it. With only a handful of builders remaining since then, this ecosystem has been gradually forgotten over the course of the past half year.

In the years since, the Celo team has organised a number of camps for entrepreneurs and developers who want to build, launch, and/or scale their projects on the Celo Blockchain in order to create products that are innovative and breathe new life into this ecosystem.

Previously, Celo has participated in seven rounds of funding with the following investors. Funding amounts were disclosed in some rounds but not in others. a16z, Polychain Capital, Coinbase Ventures, and others are among the prominent venture capital funds and industry experts who have invested.

On Celo, there are currently over a hundred active projects. Each sector of this mobile-first blockchain will be examined to see how current projects are doing.

Compared to DEXs on other blockchains, which has this ratio around 10-15%), the Ube's ratio is quite low. Current APY on Ube Dexs has dwindled to 40–90% for liquidity providers (excluded stablecoin farming pairs).

Mobius: Celo’s cross-chain stableswap exchange. Mobius's TVL now stands at around $37M. But there is a noticeable decrease in the trading volume as the market direction shifts, which currently stands at $2M (5.4% of the Trading volume/TVL ratio).

Sushiswap: A multichain AMM that supports Celo. SushiSwap's TVL on Celo is now $31M (it peaked at about $110M in TVL in November 2021).  The SushiSwap deployment has been a safe haven for first-time Celo visitors because of its well-established reputation.

Mento: On Celo, Mento serves as an AMM for native tokens that are created on the platform. It is developed by Celo Foundation and now supports: CELO, cUSD, cEUR, cREAL. This AMM currently has $320M in TVL.

Symmetric: Another DEX now has $2M in TVL.

→ DEXs have become a vital part of every ecosystem as money flows deep into a single blockchain through DEXs. From August to September of last year, Celo's TVL and trading volume both dropped significantly.

In general, the DEX on Celo is not exceptional compared to other blockchains, as evidenced by low transaction volumes and the lack of cash flow in this ecosystem.

Moola Market: The second-largest TVL on Celo is held by Moola Market, a native lending protocol. Currently, there is $57.3 million in TVL with a 6.8% Market Cap/Borrow Value ratio.

When compared to other notable lending protocols in other ecosystems, such as Venus at 14% in BSC and Compound at 23% in Ethereum, this ratio of Moola Market is quite lower.

→ To improve the efficiency of capital in ecosystems, lending is an essential sector in any ecosystem. Lending will allow for the development of additional applications in the future, such as derivatives, leverage farming, and so on. However, this blockchain is being forgotten by the cash flow, as evidenced by the TVL and volume, due to Celo's dearth of noteworthy innovation

Kresko is a composable, capital-efficient synth asset protocol on Celo. It generates yield on unused crypto assets by minting krAssets such as stocks, commodities, etc. Currently, the Kresko project is still in the early stages.

There are currently the following types of stablecoins available on CELO:

→ When compared to other blockchains, the total amount of stablecoins issued on this ecosystem is close to $140M, which is not a particularly impressive figure. The fact that only retail investors are involved in the ecosystem is demonstrated by the small cash flow.

Celo has also integrated with other protocols such as Parsiq, Bitquery, Dapp Query, Figment, and others.

AllBridge, Celer Bridge, Wrapped, Optics, etc. are some notable "silk roads" that bring new money from other places into Celo and vice versa.

→ Celo's bridges are sufficient in both quantity and quality. Consequently, users will be able to move into this ecosystem whenever they wish to explore this new territory.

Celo Explorer now has supported tracking all information within the ecosystem in intuitive ways such as charts, visualization data, transactions, etc.

As a vision of blockchain for mobile phones, Celo has released Valora as a native wallet that supports linking phone numbers with crypto wallet addresses, making it easier to transfer assets with only phone number information. Users can also have other options with Metamask and Coin98 Wallet to meet the need for multi-chain crypto wallets.

→  In short, the infrastructure in Celo Blockchain is pretty adequate to serve the Dapps in the system. Developers can come and build products on Celo with the help of these infrastructure protocols.

As Celo also supports EMV-compatibility, it makes it easier for builders from EVM-compatible blockchains to move and port existing projects into Celo, such as Sushiswap, Beefy Finance, Autofarm, etc.

As a CELO holder, you can choose from a variety of platforms, such as ChurroFi, SavingsCELO, celovote, etc., to generate passive income from your coin. These staking protocols have a user-friendly interface with a simple and elegant design.

→ This sector on Celo has not yet reached maturity because there are no strong native protocols running in it, and exotic multi-chain projects such as Beefy Finance and Autofarm are dominating the TVL, indicating that the sector is still in its early stages.

Celo Starter and CeloLaunch are two launchpad platforms that are part of the Celo ecosystems. 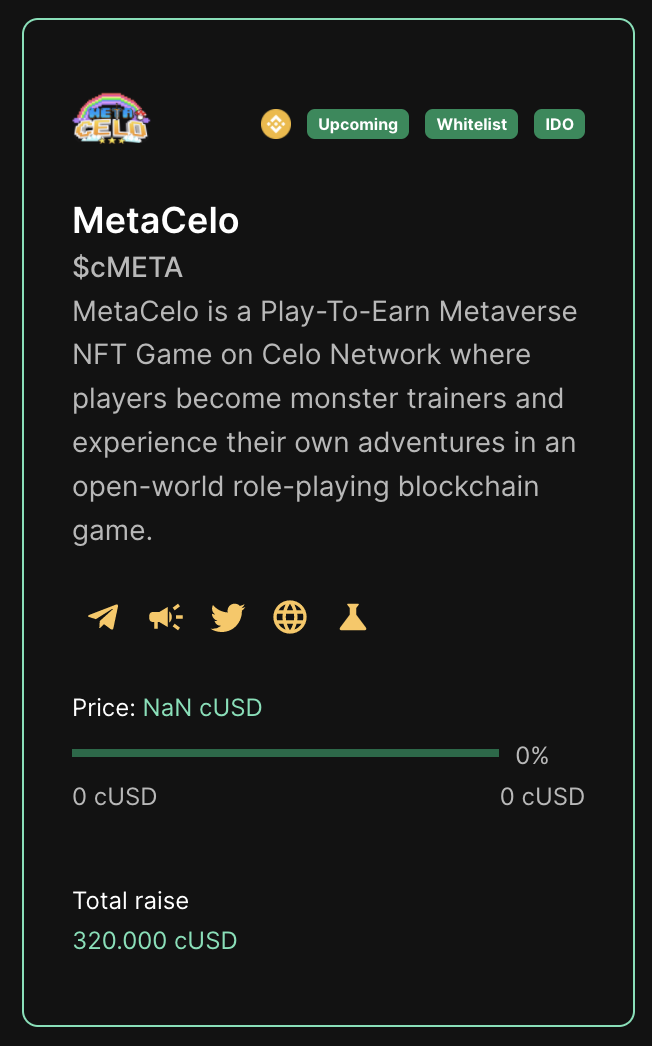 Other projects in this sector are Into the Verse, Pixelava, Createsafe, etc.

→ The gaming and NFT segments on Celo have not yet provided particularly noteworthy or innovative to attract players from other blockchains. Celo still needs to make an investment in a high-octane game in order to accelerate the growth of this segment.

One of the Celo's issues is that the community doesn't pay much attention to this ecosystem, which is evident in the project's Twitter pages with only 200 - 9,000 followers. It is also important to note that ecosystem development is influenced by social signals as it reflects the community size and the number of supporters of the project.

Celo has become less appealing in the eyes of users as a result of the loss of cash flow, demonstrating that the TVL of Dapps is extremely low when compared to other blockchain ecosystems.
As a result, the desire to develop new, highly innovative products in this ecosystem is unattractive, as developers do not want to invest their time and resources in an environment that is not fertile (unless they receive grants from the Celo Foundation).

A significant push is needed for the Celo Ecosystem, perhaps in the form of incentive programmes, in order to establish its own competitive advantage as a blockchain that is designed for mobile devices.

In contrast to other blockchains, Celo is taking a completely different approach by reaching users who are new to cryptocurrency through mobile phones. As a result, it is necessary to design a straightforward, easy-to-understand user interface that is as familiar to this target audience as the way they interact with banking apps in the traditional world.

It will be necessary for Celo to develop a marketing strategy that targets the appropriate audience and distinguishes them from their competitors' competitive advantages.

At this point, all we need to do is keep an eye on Celo's progress. They are still constructing and organizing hackathons and camps in order to incubate new projects that may breathe new life into the Celo ecosystem.

To conclude, that is all you need to know about Celo and its emerging ecosystem. I hope you’ve gained valuable insights to understand the future potential and find opportunities in the crypto market.