What is Andreessen Horowitz (a16z)? At least 10 years holders 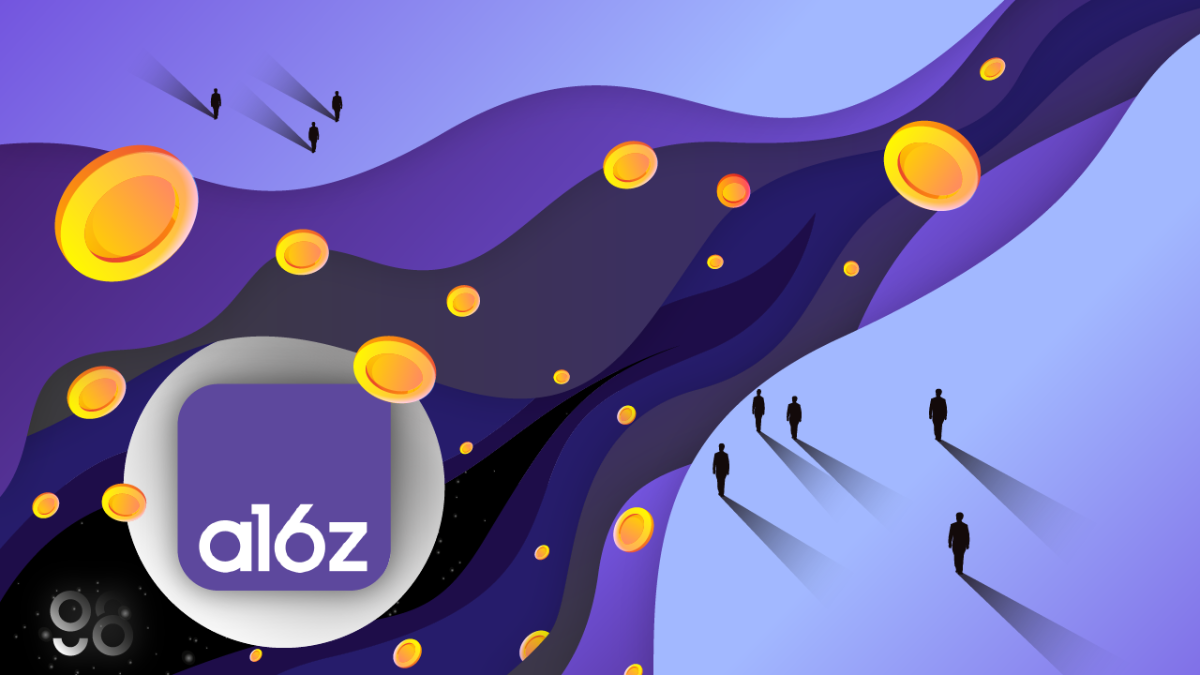 Andreessen Horowitz is one of the biggest venture capitals in crypto. The firm manages billions of dollars in various assets including crypto.

In the traditional market, venture capital (VC) always looks for high growth potentials in early-stage startups or emerging companies. They calculate the risk of the doomed startups so that the successful ones will build up their portfolios. It’s about probabilistic and risk management.

Since the dawn of Bitcoin, thousands of new crypto startups, groups, communities, and funds in the competitive and high volatility market have emerged. Most of them were deprecated and some survived through crypto winters.

Andreessen Horowitz, a.k.a a16z, is one of the earliest crypto venture capitals that made it through the winters and often led massive crypto investment deals. And in this article, we will walk you through a16z, which covers:

Let’s find out how Andreessen Horowitz (a16z) paved the way to a crypto giant.

What is Andreessen Horowitz (a16z)?

Andreessen Horowitz (a16z) is a US-based venture capital founded in 2009 by two co-founders, Marc Andreessen and Ben Horowitz, who took the fund after their name. In the early days, a16z determinedly invested in early-stage startups with bold technology ideas.

Apart from investing in crypto in the last few years, a16z’s investments include gaming, social media, education, IT, etc. In August 2021, a16z was reported to manage $18.8B in assets (not just crypto assets).

Note: a16z is the abbreviation for Andreessen Horowitz since between the first and the last letter is 16 letters of the alphabet. The a16z name is wide-used as the venture capital name is hard to remember and write for new crypto entrants.

After 5 years of investing in crypto, in 2018, a16z released a $300M crypto fund as a sign of this venture capital to publicly step into crypto land.

Besides Marc Andreessen and Ben Horowitz as the leaders of a16z, it has a specialized team for each investment sector. The team includes general partners responsible for making investment decisions in the crypto land for a16z.

The a16z Crypto team with 42 members operates as a company with a suite of different positions. And general partners might play the most critical role in decision-making progress. There are now 3 general partners at a16z, and they’re big names with a considerable number of followers on social media.

The partners are quite active on Twitter, and they launch their own personal web-based blogs. It’s the informative and insightful source of information that we can glean from.

Marc Andreessen born in 1971, is the co-founder and general partner of the venture capital firm Andreessen Horowitz based in California, United States. He has 30 years of experience in software engineering, entrepreneurship, and investments.

At Andreessen Horowitz, Marc and Ben built the portfolio with an initial capital of $300M to become $2.7B within 3 years. At the beginning of 2022, Ben Horowitz announced that a16z raised $9B from investors who have been accompanying the fund for over a decade.

Chris Dixon is the general partner of a16z. Before joining a16z, he previously invested in tech startups, including Pinterest, Stack Overflow, Stripe, etc., and co-founded SiteAdvisor and Hunch, which were acquired by McAfee and eBay correspondingly.

On personal Twitter, he often tweets posts expressing the thoughts and investment theses in his point of view. In his Tweetstorms, there are some valuable insights into the crypto land that might lead.

After bumping into the Bitcoin whitepaper in 2018 while he was at Stanford University, Ali Yahya joined the crypto land. Ali is a general partner at a16z where he researches the market and proposes investments.

Arianna Simpson is a general partner of a16z in crypto. As we see on her Twitter, she focuses on Web3 and cites a notable motto, “into crypto before it was cool”. She also founded Autonomous Partners, focusing on crypto assets. Furthermore, she previously worked for Facebook and BitGo so that she can handle a solid role in a16z.

Having participated in crypto for years, a16z owns a humble portfolio compared with other prominent VCs such as Alameda Research, Binance Labs, etc., in terms of the investment number (60+ projects). Let’s look at the following infographic to grasp the overview of a16z’s portfolio.

In the list, only crypto projects covered on the website of a16z are mentioned. A16z invests in other projects as an investment participant, not the lead one. As a result, we will also cover all invested projects by a16z in the following sections.

The a16z Crypto team decided to invest in crypto projects vertically across the ecosystem. The investments concentrated on Layer-1, Infrastructure, and NFT/Metaverse projects that might satisfy the investment criteria of a16z.

⇒ By investing in blockchain platforms in the very early stages, a16z’s position in crypto is a pioneer. Those blockchains were performing well in 2021 in every aspect (token price, development, community,…). But in 2018 - 2019, a16z made only a few investment deals, such as DFINITY, which might be a safe move for this venture capital firm since the crypto market was harsh then.

In 2020, the firm invested heavily in blockchain platforms with multiple deals, including Avalanche, Helium, Celo, etc., a16z timed the crypto market quite precisely as 2020 - 2021 was epic for crypto. In 2021, a16z concluded a massive investment deal with Solana that made the drumbeat of SOL louder.

⇒ Andreessen Horowitz venture capital firm made bets on some projects in the infrastructure category. Blockchain-based storage and L2 solution are the niches that a16z got on the board before the 2021 bull run.

⇒ By investing in two Ethereum-based DeFi projects in lending and yield farming categories, a16z got massive returns from them. Compound and MakerDAO investments were made in 2018 and 2019 after the Bitcoin $20k bubble busted. A16z invested strongly in Goldfinch to reach out to the bigger user base to keep up the pace.

Phantom was invested $9M in a funding round led by a16z for a bigger vision of this Solana wallet in Jul 2021. In Nov 2021, Phantom reached a new milestone when there were over 1 million active users for the first time.

A16z received massive returns just by investing one wallet project on Solana, which was later invested in by this firm in Sep 2021.

⇒ In 2020 - 2021, a16z has strongly distributed funds for crypto projects that build stablecoins. The stablecoin race is now being dominated by giants such as USDT, USDC, DAI, and UST. However, a16z bets on stablecoins that still have a long way to go in the crypto land to have a solid position.

⇒ After the Uniswap investment in 2020, a16z shifted to a more uncharted land in India with over 1 billion people. The fund believes $260M is a humble number to take over the Indian crypto market. Both investments satisfy the long-term holding thesis of a16z.

dYdX, a derivatives market, raised $65M from a16z, Paradigm, and other venture capitals to expand beyond Ethereum in a Series C. Previously, it raised $10M in a Series B round led by 3AC and DeFiance Capital with investors in January 2021.

The trading platform previously raised $10M in a Series A round led by a16z and Polychain capital. With triple staggering investment deals from top VCs, dYdX is now leading the derivatives market in terms of market cap and revenue.

⇒ Participating in the Series A and C round, a16z keeps going on with the derivatives market dYdX to achieve the future target. Like Uniswap, dYdX expanded its platform to the L2 solution Polygon running parallel with Etherum on the exchange.

⇒ A16z’s vision on NFT & Metaverse is as clear as the sky since the crypto fund invested in only leading companies in the category. After the success of OpenSea and SkyMavis’s success with Axie Infinity, over hundreds of million-dollar from a16z poured into them so as to launch the two projects beyond the Ethereum blockchain.

Andreessen Horowitz’s a16z crypto fund was launched in 2018 when the crypto bubble busted. However, most investments of a16z were in the 2019-2020 period as they might do research on what would come in the following years in crypto.

As the a16z firm is now managing billions in various assets, the team prefers investments in later funding rounds (Series A, B, C) to the seed round.

There are some controversial drawbacks of the Ethereum blockchain. A16z understands that L2 solutions of Ethereum are inevitable. As a result, the fund generously bagged some crypto projects working on/with L2 as follows:

A16z has been focusing on diversifying the portfolio with massive investments, and let’s see the performance of those project tokens that were invested in by the a16z crypto fund (ATH prices with prices at the beginning of 2021) as follows:

Since the investments of the a16z crypto fund were mostly in later funding rounds (Series A, B, C,...), the ROIs are humble compared to other venture capitals’ seed investments. However, Andreessen Horowitz’s crypto fund manages billions of dollars in various assets. They'd rather invest in reliable grown projects than risky ones.

Andreessen Horowitz is led by two co-founders with experience in speculative investments in hundreds of startups multiplying the fund’s total capital. Through the investment deals of a16z, we can glean some notable insights about the taste and the investment thesis of a16z to catch up with the fund in the following years.

Starting 2022 with an investment in Goldfinch, a16z is investing in projects that can connect to the mass. Besides investing in various categories in crypto, a16z looks for projects like Goldfinch that can reach most users and have a huge potential impact on the space.

On the website of a16z crypto, there are articles from in-house authors responsible for the firm’s investments. They occasionally publish articles to express their ideas as well as predictions in the crypto market. It’s a resource from a16z for us to glean valuable insights.

We’ve been through the detailed information and some insights about a16z, and then we can conclude some quick takes for readers’ convenience.

And that is all you need to know about venture capital a16z. I hope you’ve gained the overview, and our insights will be helpful to you. There will be more articles for other VCs. Stay tuned!

If you want to know further about a16z, please leave a comment below and join Coin98 Community for further discussions about Crypto.